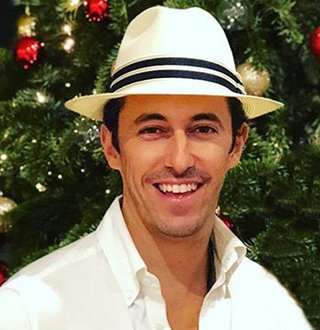 Andrew Joblon, a real estate executive, tied the wedding knot with Australian actress Claire Holt on 18th August 2018. The Originals star, Claire took it to her Instagram to share the delightful news to the followers, uploading the wedding picture with a caption of the date of their wedding.

With the colorful arbor of flowers in the background, Andrew, aged 35, was dressed in a blue suit and sneaker while his wife, Claire looked adorable in a gratifying lace gown. Moreover, the couple’s dog, Teddy joined them for the portrait as a wedding guest. Smiles for the new beginning: Andrew Joblon and his wife, Claire Holt pose on their wedding day along with their dog, Teddy on 18th August 2018 (Photo: Claire Holt's Instagram)

Similarly, on the same day, Andrew posted another picture where they are seen sharing a passionate kiss captioning the photo with the date of their wedding.

Before the exchange of vows, the couple was engaged in December 2017, sharing an intimate kissing picture on the Instagram. Claire captioned the image:

My heart is so full' and also flaunted the engagement ring.

Andrew and Claire started dating in August 2017, just after three months of her divorce with TV producer Matthew Kaplan. The former couple was married in April 2016, and just less than a year of their marriage, Matthew filed for divorce in late April 2017.

Talking about Andrew, he was previously in an exclusive relationship with the 32 years old actress, Amanda Seyfried.

She has now moved into a new relationship and is now married to actor Thomas Sadoski and is a mother of a daughter. Similarly, the 50 years old former Real Housewife, Kelly Bensimon also appeared in his dating list.

Andrew's wiki reveals that he currently holds the job as a Managing Principal at Turnbridge Equities, a privately held full-service real estate investment and development firm in the United States. He earns the average salary of  $172,537 per year that contributes to his net worth.

Andrew also has the experience as a financial analyst at a Commercial company, CW Capital, where he used to receive the yearly salary of nearly $58,982.

As of now, he undoubtedly has accumulated the stunning net worth while his wife Claire has a net worth of $500 thousand.