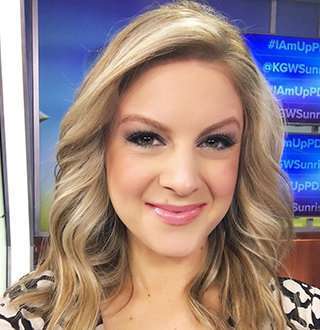 What's more to ask from life other than a successful career and a self-content personal life. Ashley Korslien has been blessed with both as she is leading a blissful married life and a fruitful anchoring career.

The charming lady who anchors KGW News at Sunrise on weekdays and co-hosts KGW's mid-day lifestyle show, Portland Today. She has been served for the various news stations such as KECT-TV, KRTV/KXLH, and KREM TV. While working on KREM-TV, Ashley volunteered her time with a non-profit organization, Big Brothers Big Sisters and served as emcee for various charity events.

More From KGW: What Is Mckinzie Roth's Age? Married Life With Husband To Measurements

Ashley got married to Christopher Louis Douville on 13 September 2014, at the Arbor Crest Winery in Spokane.

Her husband, who serves as a police officer for the city of Vancouver, Washington, is the son of  Dr. Charles and Laura Douville of Portland, Oregon. Two months after their marriage, Ashley shared a Twitter post on 13 November 2014, in which she displayed the anniversary greeting that Christopher had written for her.

Ashley, whose body measurements include a height of  5'6" (1.67 m), is also an expert on mocking her husband.

She timely shares the glimpses of her married life on social media. For instance, on 6 May 2016, she uploaded a tweet, where she blamed her beau for falling asleep whenever Ashley asked him to go grocery shopping.

Moreover, on 19 July 2017, Ashley shared a picture on her Facebook where she made fun of her husband for growing a mustache and asked her followers if it's illegal to shave Christopher's facial hair while he sleeps.

But, jokes apart, the couple is happy and secured in each other's company and seems like their married life is going to get much better in the coming days. Ashley, who lives with her husband in Vancouver along with the couple's pets, is about to welcome two new members to their blissful family.

Earlier in 2018, while appearing live on KGW-TV, Ashley announced that she was pregnant with twins, although she didn't mention the gender of the children or her due date. Further on 2nd April 2018, Ashley shared a picture on her Instagram where she flaunted her baby bump along with her husband. In the recent days, the couple is making preparations to welcome their children, and it seems like she is getting all the support from her viewers and guests too. At the end of April 2018, Ashley shared a post on her Instagram, where she mentioned a particular follower named "Shanghai Dragonfly" and thanked the person for gifting her baby clothes and toys.

For Ashley, who reached the age of 30 on 10 August 2017, it looks like life can't get any better, with a loving husband, two babies on the schedule and followers who shower her with gifts.

Ashley and her husband Christopher welcomed the twins, a son Grant Samuel and daughter, Isla Joy to the world on the 25 July 2018. Sharing the moment on her Instagram, she regarded the day as the best day of their lives.

Since then she has been sharing the glimpse of her moments with children on her Instagram. Ashley even took an Instagram to than her supportive husband, who has been equally involved in raising the newly born kids. Ashley also shared her happiness along with her work companions appearing on the set of Portland Today along with her twins in September 2018. She introduced her kids to the co-hosts Cathy Marshall, Rod Hill, Tracy Barry on the final episode the show.