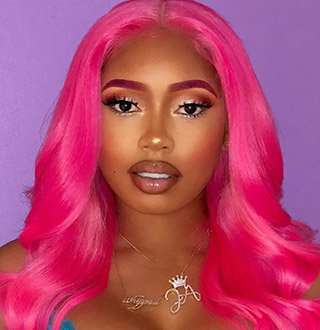 There are people who are born into the fame and make big from there. And then there are people like American rapper Kash Doll, who started from the absolute bottom, climbed up solely because of their talent and hard work to become the country's one of the most acclaimed hip-hop artists.

The Michigan-native is famous for her critically acclaimed hip-hop mixtapes like K.R.E.A.M Kash Rules Everything Around Me, Keisha vs Kash Doll, Trapped in The Dollhouse, and the most recent Brat Mail. Very recently, she also made her silver screen debut with Birds Of A Feather 2.

Here are some relatively less known wikis about Kash Doll, including her real name, net worth, height, songs, parents, boyfriend and her real hair.

On 14 March 1992, Kash Doll was born as in the motor city, Detroit, Michigan, with the real name Arkeisha Knight. After her father passed away during her early age, she was raised by her mother and her stepfather, along with her six siblings.

Interested in poetry and words from an early age, Kash graduated from Detroit City High School.

Wikis say, Kash stands at an average height of 5 ft. and 5 inches and has a dark black real hair, which she changes a lot.

2. Kash Worked As Stripper During Her Struggling Days

While she always wanted to be a rapper, during her early years she had to work as a stripper to make her ends meet. Kash, however, was not new to working and earning for her own, having already worked as a babysitter, janitor, and worker in Better Made Chip factory.

Although the stripper job proved to be very profitable, she didn’t hold on to it for long and eventually started working towards her dream of becoming a rapper.

In 2014, after releasing a remix version of Tinashe’s 2 On, Kash started to be recognized around the Detroit R&B scene and was able to land several show bookings. She independently released her first single, which got her not only positive reviews but also landed her record deal with BMB.

Since then she has released numerous mix-tapes and an EP, Kashing Out, with RMMR record label.

Like her name, her social media, and songs' lyrics suggest, Kash loves the cash and the extravagant lifestyle it buys for her. Not that she cannot afford as she has earned herself a fortune through her career in rap.

Kash has come a long way from her early struggling days and has earned a net worth that can quench anyone's thirst, the sum reaching up to more than $ 600 thousand, according to the wikis.

As is the case with most of the celebrities, Kash doll was rumored to be with someone only because she was linked with the man for a record deal. The man, in this case, was Big Sean.

The rumors were fuelled by an Instagram photo of Kash wishing Big Shawn happy birthday and calling him her baby. As it turned out, Big Shawn was not misspelled Big Sean, but a very different person and Kash’s boyfriend. Unrelated to her actual relationship status, Kash seems to joke about already being someone's wife in Twitter, probably to ward off the fans.

The rumor mill had another more devastating effect for Kash. When she uploaded a rather cozy photo of herself with beloved rapper Drake, the rumor erupted saying that Drake and Kash were now new dream hip-hop couple.

While the news couldn’t be farther from the truth, it broke up Kash’s relationship with her then-boyfriend Shawn. Kash seemed pretty angry about the prospect,

Why is it that as soon as you post a picture or you around somebody or something you dating them?

While her personal front might not be awesome, her professional life sure is. With all the hard work she did during her ascend to the top, she deserves the fame--and the luxury that she has come to earn.