Steelo Brim Is Dating New Girlfriend After Separating With Fiancée

Media
by HM Writer Last Updated:  May 18, 2021
Steelo Brim reveals about his new girlfriend in his tweets.

Steelo Brim, best known for co-hosting MTV's show Ridiculousness, started dating a new partner after splitting with his long-time girlfriend and fiancée, Conna Walker. The Fantasy Factory star, however, has only shed little information about his new beau.

He Was Engaged to Conna Walker

After over a year, in 2016, the American host proposed to his British girlfriend and got engaged. He confirmed his engagement through a series of now-deleted tweets that were posted circa May 2016. 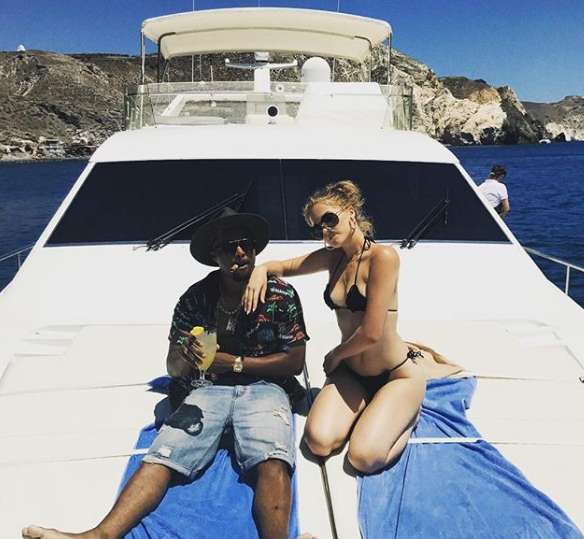 Steelo posing with his then-fiancee Conna Walker on a yacht. (Picture: Steelo's Instagram)

In one tweet, he joked he had lost his sense of humor since he got engaged to his girlfriend. Another one featured him disclosing his fiancee's birthday and asking his fans what he should do for her.

His relationship with Walker sailed smoothly thereon. The pair could be seen exchanging I lover yous on Twitter in February 2019.

However, the engagement didn't last forever. The pair deleted most of their tweets related or dedicated to each other around early 2020, hinting they had ended their relationship.

Also, their fans took the news to Twitter and shared that their favorite celebrity couple had parted ways.

Mentions About New Girlfriend In Tweets

If his tweets are anything to go by, Brim is taken and has a new girlfriend.

In his tweet dated September 27, 2020, he asked his followers, "why do white people think Tabasco sauce is hot sauce?" In reply, one Twitterati suggested him to getting the answer from the one he dates. The podcaster replied that his "gf is black."

In a similar instance, he mentioned his girlfriend on a Twitter post dated December 14, 2020. He shared that he was trying to convince his girlfriend Michael Jackson was a crip, as they were watching Jackson's The Way You Make Me Feel.

Watching "The Way You Make Me Feel" this morning tryna convince my GF Michael Jackson was a crip. — Sterling Brim (@SteeloBrim) December 14, 2020

Although Brim has suggested he has been dating someone lately, he has not revealed his beloved lady's details. He only gives glimpses of his adorable pooch.

A Look Into His Family Life

Steelo Brim was born on June 5, 1988, in Chicago, Illinois. His father, Frank Brim, served at the Chicago Fire Department for 30 years. Frank is a youth advocate and coach in the BASE Chicago and Garfield Park Little League. The actor's mother, Tracey Brim, is a teacher, author, pastor, and counselor.

The Ridiculousness host has two brothers and one sister — one of his brothers' name is Jay Brim. His sister's name is Shay Monai.

He Made His Acting Debut As A Teenager

Steelo Brim was only 13 when he debuted in the entertainment industry with the sports drama Hardball in 2001.

At the age of 19, he moved to Los Angeles, California. There, he got his first job on the radio. He also worked with the record label named A&R.

He got his major break when he met Rob Dyrdek, who helped him become the co-host of MTV's show Ridiculousness. Since then, his career sky-rocketed.

With Ridiculousness's 19th season recorded, Brim now holds the position of the show's creative producer. He also got his hands into producing when he worked as an executive producer of the TV mini-series documentary Basic Math Day One.

According to Celebrity Net Worth, he has amassed $3 million net worth to date.

Know More About His Net Worth: Steelo Brim's luxurious Encino home is a dream come true.