Home » Media » What Is Laura Kuenssberg Salary & Who Is Her Husband? Personal Details
Share

What Is Laura Kuenssberg Salary & Who Is Her Husband? Personal Details British journalist Laura Kuenssberg courted controversy when she was deemed to have asked an inappropriate question to Donald Trump, which led to twitter manhunt against her. Despite all the backlashes she recieved from keyboard warriors, she was content by the fact that she had a special person back home who could help relieve the stresses of a hectic day at work.

The British national is the first female political editor for the BBC News Network. Prior to her promotion, she had worked as the chief political correspondent for various BBC News projects such as ‘BBC One Bulletins’, ‘Daily Politics’ and ‘BBC News’.

Before joining the Beeb, she was a business editor for ITV News and also worked as the co-newscaster for ITV's News at Ten.

She was awarded Broadcaster of the Year by the Political Studies Association in 2016 and  Journalist of the Year Award in 2016 at the British Journalism Awards.

Kuenssberg was born in 1976 in Italy as the daughter of businessman father Nick Kuenssberg and Sally Kuenssberg. She has two siblings Joanna and David Kuenssberg. She grew up in Glasgow and belongs to a very wealthy and affluent family.

Her father is an Order Of British Empire (OBE), one of the highest honors bestowed to commoners in the UK. Moreover, her sister is a British High Commissioner for Mozambique while her brother is also into bureaucracy and is the executive director at Brighton City Council. 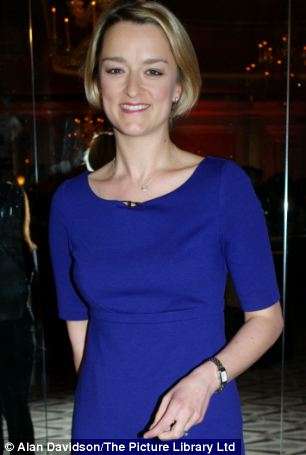 She did her schooling from an independent girls school, Laurel Park. She majored in history from the University of Edinburgh and later pursued a journalism course in Washington D.C.

She was first introduced to the world of journalism after joining NBC News during her time in the USA. She even worked in local radio and TV stations in Edinburgh before stepping into the popular BBC Network.

What Is Laura's Salary In BBC?

Kuenssberg is a well-known face in the British News scene having worked with various news channels. Despite belonging to a wealthy family, she has made her own mark in the world of journalism thanks to her devotion and dedication.

Having begun her career through BBC, she left the network for a brief period, in 2011. She was believed to be one of the biggest earners in ITV commanding a six-figure salary.

However, her stint in ITV was shortlived as she returned to Beeb in 2013, two years after her departure. Having been welcomed back after leaving she was able to ask for a huge salary in the network.

The BBC's 2017 salary distribution sheet also confirmed the claims.  She is estimated to earn between 200,000 to 249,000 as salary in BBC making her one of the highest earning female newscasters. Her salary has contributed hugely to her net worth which stands at $2 million.

Controversies are inevitable when you work in the media especially when you are dealing with political issues. Laura too has not been exempt from the fact and has been trapped in a fair share of controversies.

In 2016, Laura was involved in a controversy where she was accused of breaking the impartiality rule of Journalism. She was blamed of misrepresenting and twisting the words of Labour leader Jeremy Corbyn, so as to publically downgrade his image.

The web of controversy didn’t end here for the journalist. She was again on the fore of Twitter backlashes for presenting an inappropriate question to the POTUS which was said to create a diplomatic issue between the US and UK. The backlashes towards Laura went to such extremes that it even led her to the thought of quitting social media.

However, being someone who stands for what she does, Laura is still tweeting and using her freedom of speech at its best!

Who Is Laura Kuenssberg’s Husband?

The controversial journo can take solace from the fact that she has a nice companion to fall back and relax from the news humdinger. Laura is happily married to her husband; James Kelly. Her husband is a management consultant and a Harvard graduate.

The couple's wedding has remained mysteriously hidden from the public eye. And the fact that her Instagram wall is filled with abstract pictures and no mentions of her personal life makes it hard to unearth details about her wedding ceremony.

Despite Laura shedding very few insights on to her married life, she does has a partner who can help her forget the woes her job brings.

After all, a glass of fine and a companion to share your woes in front of a fireplace is all one wants after a tiring day at office.and wedding is still a mystery to the world.