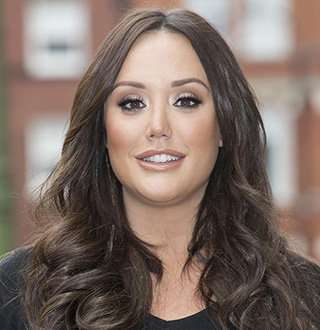 English reality television personality Charlotte Crosby made an instant comeback after the rumors of her splitting with boyfriend surfaced and didn't step back to hint on her possible future of getting married to her companion.

The British national is quite known for appearing in the MTV reality series Geordie Shore and for winning the twelfth series of Celebrity Big Brother in 2013.

Age of Cosmetics: Charlotte does a makeup tutorial using her Flique products alongside her favorite makeup artist Lyndsey Harrison on her self-proclaimed YouTube channel (Published on 15 May 2018)

Charlotte Crosby is also an entrepreneur having launched her fashion line, Nostalgia in 2014 in association with British online fashion retailer, In The Style.

Born on 16 May 1990, Charlotte-Letitia Crosby was raised in Sunderland, England by parents Letitia and Gary Crosby. She shows immense love for her parents, and she even threw a massive fairground-themed party for her father on his 50th birthday and also presented her father with a football-themed cake.

She attended St Anthony’s Girls’ School completing A levels. Initially considering to study criminology at university, the 28-year-old television personality auditioned and was immediately cast to appear in the reality TV show, Geordie Shore based on Tyne and Wear in 2011.

Charlotte appeared in the twelfth series of Celebrity Big Brother in August 2013 and won the series in September 2013. She’s also a regular panelist on the panel for the fashion strand Rate or Slate, This Morning and has appeared on the panel for Xtra Factor, Celebrity Juice, and Britain’s Got More Talent.

In April 2014, Charlotte started broadcasting her own reality series on TLC, The Charlotte Crosby Experience where she spends time in different cultures and communities. She starred in the second series of reality show Ex on the Beach joining the cast in the fifth episode in January 2015.

In 2017, Charlotte was a stand-in presenter on the Capital North East breakfast show, and in March 2018, she started starring in her wall reality series on MTV, The Charlotte Show.

According to sources, Charlotte Crosby has got an estimated net worth of $1 Million that she amassed through her career in media.

Charlotte has garnered her fortune through her appearances of the TV series, The Sarah Millican Television Programme, Celebrity Big Brother’s Bit on the Side, The Wright Stuff, and Celebrity Wedding.

She also earns from her show, The Charlotte Crosby Experience and her books, ME ME ME, Brand New Me, and Live Fast, Lose Weight: Fat to Fit brought her a considerable amount of wealth.

After going through an on-off relationship and a final split with ex-boyfriend, Stephen Bear who had the audacity to mock her mother and father, Charlotte found her perfect man, Love Island star, Joshua Ritchie. The two had sparked some rumors about dating in 2017 but only made their affair official in 2018.

In September 2018 there were rumors on the pair splitting up after an unknown source informed The Sun about Charlotte being unable to get hold of Joshua along with them alleging that she had unfollowed him on Twitter.

And Charlotte had the best response letting everyone know that the talk was utterly ridiculous as she posted a video on her Instagram.

If the video wasn’t enough, Charlotte even posted a close-up picture of her boyfriend on Instagram as her caption hinted on two more days before she gets to see her partner again. Steadily Dating: Charlotte posts a picture with her boyfriend as the pair cuddles up together on Instagram on 9 September 2018 (Photo: Charlotte Crosby’s Instagram)

Charlotte is helplessly in love as she even got her boyfriend’s name inked on the back of her neck and didn’t hesitate to show it off on her Instagram feed. And even though the pair has been dating for a short while, fans are already waiting for them to pronounce wedding vows and introduce more addition to the family.

Adding to the excitement, Charlotte even hinted at her plans of getting married to Joshua when a fan asked the question through Instagram. Another question asked if Charlotte would have a child with her boyfriend soon to which she replied that she would in the future but not anytime soon as they have plans to travel.