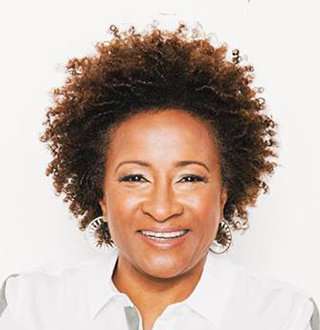 American actress Wanda Sykes has not always been the happy lesbian she is today. Her family had a lot of difficulties while coming to terms with her sexuality. There might have been some times when she found it hard to adjust in society as a black lesbian. But she stood her ground and marked her place as a proud wife and mother.

Wanda Sykes is an American actress and comedian who is prominent for her work as a writer on The Chris Rock Show. She is also known as one of the 25 funniest people of 2004 in America according to Entertainment Weekly.

Escaping Politics: Wanda Sykes talks about inserting politics into her comedy and shares her tips for avoiding time outdoors on Late Night with Seth Meyers (Published on 24 October 2018)

It was in 2001 that Wanda won the American Comedy Award for Outstanding Female Stand Up Comic and a Comedy Central Commie Award for Funniest TV Actress in 2003.

The Portsmouth native was born on 7 March 1964 to parents Marion Louise and Harry Ellsworth Sykes. She attended Arundel High School in Gambrills and graduated from Hampton University, earning a bachelor of science degree in marketing.

Wanda, age 54, started her career as a contracting specialist at the National Security Agency but took a swerve in her path after five years and began doing stand-up comedy. Her first performance was in front of a live audience at a Coors Light Super Talent Showcase in Washington, DC, in 1987.

As she honed her talents at local venues, Wanda eventually got to share the stage with J.B. Smoove, Adele Givens, Bernie Mac, D.L. Hughley, and Bill Bellamy. Her first break was opening for Chris Rock at Caroline’s Comedy Club which led her to join the writing team on The Chris Rock Show in 1997.

Since then, the comedian has appeared in movies like Pootie Tang and even TV shows like Curb Your Enthusiasm.

Wanda Sykes' Family Wasn't Supportive Of Her Being Gay

It was in November 2008 when Wanda came out publicly as a lesbian at a rally after California voters had passed Proposition 8, which was a ban on gay marriage. She even gave an unrehearsed speech at the event which she told afterward that she had ‘no intentions’ of giving.

She shocked herself as she took all her anger out in the speech after identifying herself as a proud lesbian. But coming out to her conservative parents was a pretty big step for Wanda. In fact, she came out to them at the age of 40 before addressing her sexuality in public.

They were not ready to accept her at first, and Wanda even talked about it in an interview on Piers Morgan Tonight in June 2011 as she said,

I have absolutely nothing to hide. I mean, I am what I am and this it it. The worst thing, I guess, is just dealing with it, you know, like with family.

Her family had great difficulty accepting her homosexuality, but they reconciled soon after Wanda became a mother to her kids.

Wanda's Parents Did Not Attend Her Wedding With Wife But They Soon Reconciled, How?

It was before she even came out publicly that Wanda married her lesbian wife Alex Niedbalski in October 2008. They had met in 2006, and it was the time when Wanda was facing trouble with her family accepting her as gay.

In fact, her parents didn’t even attend her wedding with her wife. And while they lived in a brief estrangement, they put their differences aside after Wanda became a mom to her beautiful kids.

It was on 27 April 2009 that Wanda’s wife gave birth to their fraternal twins, daughter Olivia and son Lucas. And Wanda’s parents couldn’t keep the family broken and soon took up their roles of grandparents while coming to terms to their daughter’s sexuality. All Smiles: Wanda Sykes smiles for a picture with her lesbian wife, Alex at the Creative Arts Emmys in LA. (Photo: huffingtonpost.com | 6 December 2017)

Anyway, the family is quite content with their lives right now, and Wanda hasn’t bothered to reveal her kids to the eyes of the public. She feels that her 9-year-old kids are better off without making their appearance to the media.