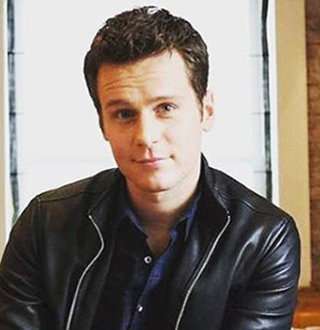 Openly gay Jonathan Groff is an award-winning American actor who has won millions of fans over the globe for his scintillating acting and his down to earth personality. He feels profoundly ordinary about his sexuality and even proudly represents himself as the leader of the gay/lesbian community.

The Pennsylvania native is a famous American professional actor and singer who is renowned for playing the role of Melchior Gabor in the 2006 Broadway production Spring Awakening and also starring in 2015 Broadway musical as King George III in Hamilton.

Jonathan is also known for starring in various TV series like Boss, HBO comedy series Looking and its film version Looking: The Movie and also his performance in Fox musical-comedy series Glee.

Jonathan Groff Developed Interest In Acting From An Early Age

Jonathan first opened his eye in this world on 26 March 1985, in Lancaster, Pennsylvania. He was born to father Jim Groff, a horse trainer, and mother Julie, a teacher by profession. He also had an elder brother David.

Groff developed an interest in arts and acting from the offset as he performed in numerous musicals at Fulton Opera House while still in school. This paved the way for him to pursue his career in the field of acting.

He attended Conestoga Valley High School and graduated in the fall of 2003. He was then offered to collaborate with the national tour of The Sound of Music which he accepted gleefully. Later he moved to the city of dreams, New York, to enhance his career.

The artist appeared in a musical Fame which garnered him ‘Actors Equity Association’ card in 2005. He then went on to make his Broadway debut with In My Life  the same year which opened the floodgates for him.

His big break came in 2005 under Broadway in the form of rock musical ‘Spring Awakening’ drawing appreciation and praise from everyone. The musical also earned him his first nomination for the famous ‘Tony Awards’ for leading Actor in Musical.

Interesting: Tory Belleci And Kari Byron Relationship Isn't What It Looks Like - Married, Gay, Net Worth And Facts

The 33-year-old actor then went on to star in many other musicals, TV series and movies with his most notable performances coming as Jesse St. James in US musical-comedy series Glee (2010), HBO gay comedy series Looking (2016), Bradley Cooper starrer American Sniper (2014), Mindhunter (2017).

The handsome actor also lent his soothing voice in 2013 hit animated film Frozen for the lead character of ‘Kristoff.'

Jonathan Groff Came Out As Gay In 2009

Groff made his sexuality known to the whole world when he came out publicly as gay on October 2009 in Washington, D.C. during the National Equality March.

He was honored with the Point Horizon Award as part of his recognition on taking a significant persuasive role as an advocate of the lesbian, bisexual, gay and transgender community in April 2015. He also received Bayard Rustin Award from Equality Pennsylvania.

Jonathan has proudly accepted his sexuality and presents himself to the world as the symbol of gender equality.

After declaring himself as openly gay in 2009, Jonathan was seen dating Gavin Creel, also an actor, in the same year. But the duo split for unknown reasons after just one year of their relationship.

Breaking up with Gavin, Jonathan was in a cozy relationship with another actor Zachary Quinto. Like his first relationship, this also ended after three years in 2013 leaving him single. You May Like: What If Ross Hull Is Gay? Married, Wife, Parents, Height - A Complete Bio

Ans since then, he has not been involved in any other relationships. He probably might be waiting for the right person to get married with or most probably enjoying his singlehood.

Keeping his unsuccessful love stories aside, he has other's soon to be married life to cherish for. His close friend and Glee co-star, Lea Michele announced in May 2018 that Jonathan will be her lucky ‘Maid of Honor’ for her wedding with Zandy Reich, president of clothing company AYR.