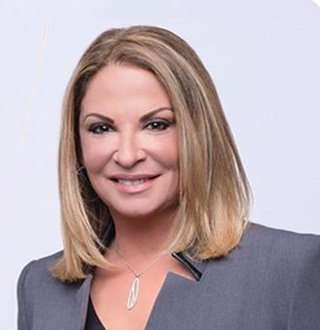 Ana Maria Polo’s famous show has been broadcasted continuously since 2001 until a sour incident with her colleague as well as partner occurred which led the show to be closed for six months.

The Cuban-American TV personality is a lawyer and arbitrator on Hispanic television show Caso Cerrado who is famous as Hispanic version of Judge Judy. She is also the author of the book Dear Dr. Polo: The Secret Letters of Cased Closed.

Besides being a tv personality and author, she is also engaged in philanthropic work for which she is awarded Mickey Leland Humanitarian Achievement Award.

Born on 11 April 1959 at Havana, Cuba as Ana María Polo González, she was the oldest daughter of Joaquin Polo and Delia Polo. She recently lost her mother in October 2018 and even shared a heartfelt post on Instagram.

The Cuban beauty moved to Miami with her family when she was twelve. Later she moved with her family to Puerto Rico. During her time at Puerto Rico, she participated in different musicals including Godspell, Jubilee and Show Boat.

She graduated from Florida International University with a degree in political science and later received Ph.D. in law from the University of Miami in 1987. After graduating, she was a member of Florida Bar and is also worked for the law firm,  Emmanuel Perez & Associates, P.A. in Coral Gables, Florida.

After serving as a lawyer for more than two decades she finally entered into the television series in 2001 with Telemundo’s program Sala de Parejas (Couples’ Room) where she appeared as an arbitrator.

As a lawyer and loved tv personality she has made her fortune from her judicial background. According to Alpha Life, she has a net worth of $1.4 Million and is estimated to earn a yearly salary of $350,000.

When it comes to her love life, she was married with a man decade older than her when she was just 19. But the married life with her turnt into divorce soon after they lost their baby.

After her marriage ended, she is said to have adopted a child named Peter Polo whom she raised alone and whose identity hasn’t been revealed yet.

The second time Polo was involved in a romantic relationship, it wasn’t with a guy but with a girl, LESBIAN Alert!

She was in a relationship with her personal assistant and executive producer of her show Marlene Key. Many sources claim that the relationship between the couple was on for more than 25 years. They also lived in the same house and shared finances in the same account. When she was asked about her relationship with Marlene, as per infobae, she stated in the interview saying:

I do not think anybody has to come out of any closet, I do not think there's any obligation for anyone to leave when we see people say they're straight, just telling someone to tell you they're gay is offensive.

On the other hand, it’s unknown whether she is married to Marlene or is just a bisexual as she publicly hasn’t confirmed her sexuality.

The relationship between the couple soon turned sour when the news came out that Marlene wasn’t treated well by Ana.

After getting tired of her poor treatment, her partner filed for divorce demanding $2 million in 2018.

Her partner demanded a big amount for the illegal use of the name of the program by Polo and for the extraction, of more than half a million in a shared account.

The break between the couple also impacted the show which was closed for 6 months but returned on October 2018.