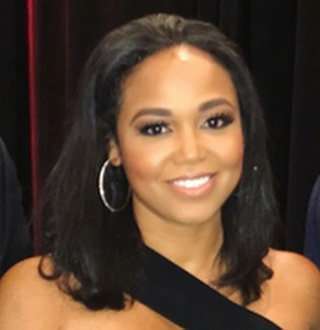 American attorney and media personality Faith Jenkins, aged 40, bewildered her Twitter followers stating that she is getting married in a Vineyard with her husband-to-be.

The Louisiana native serves as a legal analyst on MSNBC network and appears as a judge on a syndicated arbitration-based reality court show, Judge Faith.

Judge Faith: US attorney Faith Jenkins acts as a judge in many lawsuits in nationally syndicated court show Judge Faith (Published on 16 October 2018)

Apart from her law career, Faith has participated in numerous beauty pageants and won once won the title of Miss Louisiana Tech. Actually, she is the first African-American woman to earn the title.

The star US attorney was born on 21 November 1979 in Shreveport, Louisiana, the United States. She is an eldest the child in the family and is accompanied by a younger sister.

Faith received her early education from C. E. Byrd High School. Later, she went to Louisiana Tech University and earned her bachelor's degree in political science. Then prompted to go into the law career, she earned her Juris Doctor degree from the Southern University Law Center in Baton Rouge, Louisiana. She was ranked first in her class.

Faith Jenkins's Family: A Close-Knit One

Faith shares a close bond with her family and often shares the glimpse if her intimacy with the family through her social sites. She does not forget to wish her parents on their special day, i.e., Father's and Mother's day. Love Towards Parents On Instagram: Faith wishes both her mother and father on Mother's day in May 2018 (Photo: Faith Jenkins's Instagram)

On 2017's Mother's day, she uploaded a throwback picture with her mother and wrote a lovely caption. The caption stated that the prayers of her mother had brought her through the most challenging times and her encouraging words have inspired her to live the dreams day after day.

Later, she thanked her mother for giving life and supporting her throughout it.

Faith loves to spend times with the members of her family. She celebrated the New Year 2018 having dinner with her niece and nephew and her friend, Wayne Brady, an American actor in Kaneohe, Hawaii.

In her student life, Faith used to participate in beauty pageants, earning several titles. She won the Miss Louisiana Tech in 1998, being the first  African-American woman to win the title at the age of 19.

After the first achievement, she again won the Miss Louisiana title in 2000 and advanced to compete in the Miss America in 2001. Faith became the first runner-up in the competition and won the Quality of Life award, and was named the best swimsuit and talent.

Later, Faith enrolled at the Southern University Law Center, where she earned her Juris Doctor degree ranking in the first position in her class.

Faith began her legal career in the New York City office of Sidley Austin, the sixth-largest U.S.-based corporate law firm. She worked there nearly for a half decade and became Assistant District Attorney in the Manhattan District Attorney's Office.

Meanwhile, Faith started appearing in several channels as a legal analyst. She has appeared on CNN, Fox News, and MCNBC analyzing the most high profile cases and legal issues on the network.

As of 2014, she appears as host and judge of the new daytime court show, Judge Faith, produced by The Tornante Company and Trifecta Entertainment. The nationally syndicated show started on 22 September and concluded its production after three seasons in 2018.

Moreover, Faith is also involved in another show about law and justice, a documentary series, Justice By Any Means. The show that premiered on 7 December 2015 on TV One, features the various case of injustice and crimes as they are solved by African-Americans. Faith has been the host of the show since its inception.

In her recent Twitter post, Faith revealed that she is working on a project involving cold cases homicides. Apparently, Faith has assembled a team that is going to take on the murder cases that have remained unsolved for some time and to try and work their way through those cases.

Faith's Net Worth As Attorney And Media Personality

When it comes to earning, Faith had a made big money from her work as an Attorney and amassed the significant net worth. She earns above the average salary of a judge in the United States that reaches $110,940.

Moreover, as a legal analyst in various networks, she collects the annual salary of about $60,329.

With the involvement in attorney sector for more than a decade, her net worth reaches $2 Million.

Regardless of her open career, Faith does not prefer to share the glimpse of her relationship status on social media or in the interviews. As she is active on social media, she has not flaunted her possible boyfriend or husband.

However, in 2012, she made a tweet stating that she was gonna get married on a Vineyard with her possible husband-to-be. However, she did not reveal the identity or any details regarding her future husband.

You May Like: Kaylee Hartung Personal Life: Has Boyfriend Or Already Married?

Well, that was just a comic post about her marriage and husband. In her real life, she is yet to start her love life with the husband-like partner.