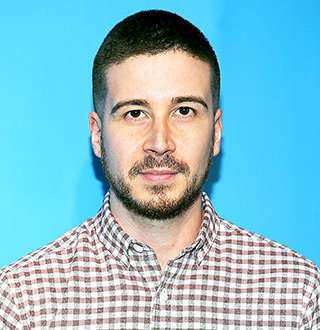 American reality television personality, Vinny Guadagnino got tired of walking on a tightrope trying to make people clear on his sexuality and started walking on eggshells as he introduced his romantic affair and possible wife.

Vinny Guadagnino is best known for his appearance in the MTV’s reality television series, Jersey Shore that has aired 71 episodes in 6 seasons to date.

Looking at Past: Jersey Shore Cast reacts to Vinny’s original casting tape from 2009 in the MTV (Published on 21 March 2018)

Born on 11 November 1987, Vincent Guadagnino was raised in Staten Island, New York along with his two sisters.

Vinny comes from a traditional Italian-American family, and his parents separated when he was in his formative years. His mother is from Sicily, Italy while there’s no specific information on his father but it can be deduced that he is from America.

The reality star's childhood was spent in the company of women, mother, and sister, which could possibly explain why is such a womanizer.

You May Also Like: Doris Burke's Husband & Daughter, Who Are They? Personal To Career Details

Possessing an average height of 5 feet 7 inches (1.71 meters), Vinny, aged 30 got the opportunity of joining MTV’s Jersey Shore right after he graduated.

He also appears on the Jersey Shore spinoff Jersey Shore: Family Vacation which is about to film its second season. Vinny launched the clothing brand, IHAV (I Have A Vision) with the message promoting anti-bullying.

According to sources, Vinny has got an estimated net worth of $3 million, which shouldn’t be a great surprise looking at his hard work. His fortune mainly came from his role in the Jersey Shore. He also made some money as appearing in the movie, Jersey Shore Shark Attack in 2012.

Vinny also earned his wealth from his co-authored book with Samantha Rose, Control The Crazy: My Plan To Stop Stressing, Avoid Drama, and Maintain Inner Cool that was published in 2012 which sold numerous copies.

Adding to that, Vinny made money from his own talk show, The Show with Vinny that debuted in May 2013.

There’s no explaining how rumors tend to spread inexplicably fast, even if it’s just based on a word a person speaks.

Vinny didn’t get to ignore those rumors too as he was marked as a gay for supporting gay rights. It all started when Vinny promoted MTV’s campaign, A Thin Line that speaks against anti-gay bullying.

Adding to that, fans actually want him to be gay and immensely support his "bromance" with DJ Pauly D. Vinny too, treated his fans with a photo on Instagram as he walked hand in hand with DJ Pauly D. The rumors got a boost when Vinny tweeted about being in a Gay bar saying,

Reading the full tweet though, made it clear that Vinny was just looking for girls that gays bring as their friends.

But some of the comments just kept asking if he was gay. Well, all these speculations were put to rest when Vinny got himself a hot girlfriend.

Vinny has a pretty long history of romantic affairs, but the one he was most serious about was with the Instagram model Elicea Shyann.

He was dating Elicea throughout the filming of Jersey Shore: Family Vacation. The romantic duo, however, shed the combined bio of girlfriend-boyfriend as they broke up shortly after the shoot.

It all started when Vinny picked up a stripper at a strip club but still came clean to Elicea. As if that wasn’t enough, in another episode, Vinny went to a club and got a bottle service girl’s number.

Vinny confessed that the fling with his former girlfriend wouldn’t have lasted anyway as they were in a long distance relationship. But he showed a flicker of hope for the patch up as he further added,

Maybe down the line, you know, I hope that the logistics work out someday so we can be together.

As of now, Vinny isn’t involved with anyone, or maybe he is and hasn’t revealed it yet. But he seemed to have an unsatisfied parting with ex-girlfriend Elicea so he might go back and win her heart and introduce his future wife.