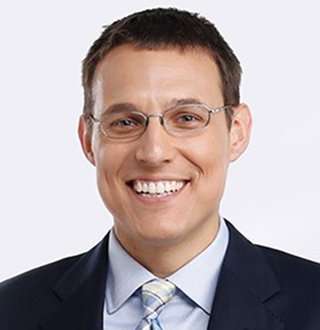 For American journalist, Steve Kornacki, who was born as gay- growing up, all the usual things in life were harder as he hid behind his 'straightness.' He was all alone until he met someone special who inspired him to embrace the true 'Steve': the gay Steve Kornacki!

The Groton, Massachusetts-native is an American political journalist, writer, and television host, who is an MSNBC host and National Political News Correspondent.

Stephan started his journalism career as a reporter for a New Jersey political news called PoliticsNJ.com. He worked there from 2002 to 2006. Subsequently, he reported on the U.S Congress for the newspaper, Roll Call.

In March 2013, Stephan co-hosted The Cycle on MSNBC with political strategist Krystal Ball. The same month he was announced to take over another MSNBC program, Up with Steve Kornacki, starting in April. The time slot for the show was 8-10 a.m. ET on Saturdays and Sundays.

On 8 May 2017, Kornacki became National Political Correspondent for NBC News Group, while continuing to co-host the 4 p.m. edition of MSNBC Live with Nicolle Wallace.

Before the announcement, he had been transferred from his anchor duties at MSNBC towards franchise reporting for NBC News in May 2017.

According to Payscale, a host working at MSNBC earns the average monthly salary of $52,029. Whereas, according to career bliss, the NBC News Correspondent earns the annual salary of $201,000.

Born on 22 August 1979, to Stephan Joseph Kornacki Sr. and Anne Ramonas, Steve Kornacki is a graduate from Boston University.

He possesses the mixed ethnicity of Lithuanian and Polish. He has an older sister, Kathryn Kornacki, a professor at Caldwell University.

You May Like: Tinsley Mortimer & Boyfriend Scott Kluth Split, Won't Be Parents Together!

From childhood to adulthood, Steve had a tough and different life than others. He lived in fear, stuck in a web of lies and secrecy about himself.

When all his guy friends were crushing over a sexy girl, he was usually in a restricted manner gushing over the guys. Why?

Because he was gay; he lived a life crippled with loneliness, staying guarded about being gay. That’s why the list of his dating life had been a blank page.

Finally, he made a plan not to be lonely as well as not be exposed as gay; when he was attending Boston University, he started secretly dating online to find out what it would be like to be someone’s boyfriend.

However, he had fears before starting - concerned about contracting a disease and worried that the guy ends up exposing him, he had second thoughts about the whole online dating game. That was the life he led before he had come out as gay!

Suppressing half the life, pretending to live as a straight man despite being gay, Steve finally put his fears and paranoia behind as he came out as gay on 16 November 2011. He penned the whole experience-his story as a gay man--while he was working at a magazine called Salon, where he published his story.

A week prior to the publication, he had told his family to which they replied, "We're proud of you."

In the same story, Kornacki spoke about dating men secretly online. He happened to meet a special guy, who happened to be in a similar situation; he referred to that particular boyfriend as 'Dan' although he cited that it wasn’t his real name.

His boyfriend, Dan, come out as gay in 2010 and asked Kornacki to see his parents. However, the American news personality declined the offer out of paranoia and lost his loving partner.

That regret, that sense of companionship he got to cherish which he lost ultimately, became the reason for him to come out as gay. He did, and since then, he has been very open about his sexuality.

Who Is Steve Kornacki's Partner In 2018?

He would have probably got married to a girl if he hadn’t come out as gay- because that was the only thing left to do- that or spending the rest of his life without any partner, any kids and any family of his own.

To not suffocate in the misery and challenging life as a closeted gay man, he often chose humor to let some of his pain out. Even after he was open about his sexuality, that habit remained.

A few years after Steve came out as gay (in 2011), he joked about his relationship in public. When he was asked whether he had a wife by a random Twitter user on 17 September 2015, he sarcastically replied,

“My wife Ginny and I have been blissfully married for 14 years.”

His unrevealing humorous relationship tweets over the years show his lingering fears from the past. However, as for his love life in 2018, he seems to be on a lookout for a partner, but this time with freedom, moving away from his troubled youth.

See More: Tyra Banks Split Before Getting Married; Photographer Boyfriend Out Of Picture