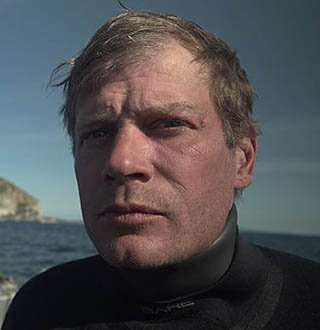 Shawn Pomerenke took over his father's mantle from an early age. Not only did he achieved success following in his father's footsteps, but he was also rewarded handsomely.

Famously known as “Mr. Gold,” Shawn Pomerenke works in the Television Series, Bering Sea Gold. Co-owner of the Christine Rose and Shamrock; two Highline dredges situated in Nome, the star, aged 43, has proved himself as one of the most successful gold diggers in the living memory.

Discovery Original:- Shawn stars in the trailer for the season 10 of Bering Gold (Published on 11 May 2018)

Shawn was born on 26 March  1975, to mother Cathy Tieva and father Steve Pomrenke in Nome, Alaska. His father Steve was a gold getter, and Shawn developed a passion for gold digging from a very early age.

Shawn Pomrenke left his house and started gold digging at the young age of fourteen with his father, Steve. Honing his skills along with his father as the guiding star, Shawn is now considered as Nome’s most exceptional gold getter by many. He loves to brag about being the top gold-getter in Alaska.

Shawn along with his father and one of the best mining ship, Christine Rose, has been a part of Discovery's gold mining show Bering Sea Gold since 2012.

However, not content with living in the shadows of his father, Shawn is planning to purchase the mining rights over 10,000 acres of property. He believes the considerable landmass contain a quarter billion dollars in gold.

Though this Mr. Gold has fierce competition with his rivals, his most difficult battles are with his father who does not have the same ideologies when it comes to running the family business.

Not just that, the hot-headed gold getter has had his issues with the law enforcement and has been handcuffed multiple times for DUI charges.

However, he has cleaned up his acts and has not had any issue with the authorities since 2013, signifying his new found maturity.

The reality star was married to his wife, Jenny. There have been no shreds of evidence of the duo's marriage date. The couple had two children together with a son and daughter Emily. But, the husband and wife had their issues over marriage and separated. Despite no details about his divorce with wife, he has listed himself a single on his Facebook profile and in 2016 in an interview with reddit.com; he mentioned that he had no wife.

Despite distancing himself from his wife, Shawn is close to his kids and posts regularly about them, whether that be a casual journey home with his son or his daughter's sports function.

Behind Shawn Pomrenke's Net Worth

His TV career has brought him name, fame and whopping net worth. As the lead star of the show Bering Sea Gold, Shawn and his father command a huge salary. And that salary has been reflected in his net worth.

As of 2018, Shawn Pomrenke has the estimated net worth of $2 million. Whats more, his father Steve also has a net worth of $5 Million, making the Pomerenke family one of the richest in the show.

Having already aired seven seasons, the show still garnering a massive number of views per episode. And the show has been renewed for its eighth season and is sure to run for a considerable amount of time. That, in turn, will only serve to increase the net worth of the Pomerenke family.

2. Discovery pays Shawn in the excess of $200 thousand per season for his appearances.

4. His favorite movie of all time is 2000 titled The Patriot starring Mel Gibson.