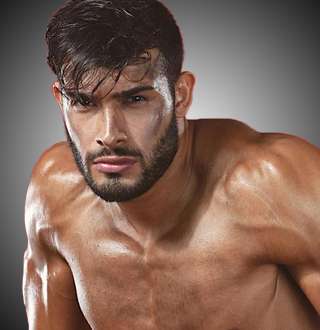 Sam Asghari and girlfriend, Britney Spears have appeared a formidable couple in Hollywood. Their year and a half long relationship were rumored to have elevated to the next level. We now reveal some revealing wikis about him including his mixed ethnicity passed on from his parents, his dream job and his romance with girlfriend Britney Spears.

Sam was born on 23 March in the year 1994 in Tehran, Iran. He lived his childhood in his hometown but later moved to the United States in his teenage years, leaving his family behind.

Ethnicity-wise, he's half Persian and half American passed respectively by his mother and father. His parents lived apart since he was two years old.

He's the oldest of the four siblings. His youngest sister Fay happens to be a registered cosmetic nurse. Both siblings share a close knit-bond, and they even timely tag each other on special occasions such as birthdays.

The rest of his bio is not public knowledge.

Sam Asghari had to shed an astounding 100 pounds off his body after tipping the scales at a whopping 290 pounds. The Iranian hunk decided to hit the gym after gaining weight and decision to hit the gym has paid off big time.

On a cover profile on him by Men's Health, he recounts his time dealing with body image issue as:

"I didn’t want to have to deal with that depression and disappointment anymore. I had to restart."

Dreamt Of Having The Job Of Police Officer, Net Worth

Before turning into a model, Sam dreamt of being a police officer and working in law enforcement. However, he later changed his idea and became a fitness-savvy.

In an interview with MSI College, he reasoned that he was way more passionate about fitness modeling and acting, which turned his way from his childhood dream to modeling.

Moreover, the model was too shy before choosing his career in modeling. He was uncomfortable walking around topless. But with his entrance on the modeling industry, he gained massive confidence and started kissing success.

He appeared in famous music videos such as Fifth Harmony's Work From Home and Britney Spears' Slumber Party. He also had a job as a personal trainer at Royal Personal Training.

As for modeling, Sam is a Print, fitness and commercial model who has appeared in the covers of famous magazines such as Muscle and Fitness. His height of 6'2" and chest that measures around 42 inches which have caught the attention of modeling agencies.

In 2016,  he became the new face of Under Armour and represented the super-popular athletic apparel line for the winter campaign.

With a budding career in the modeling industry, Sam undoubtedly is raising his net worth high. However, he ha kept the exact figure of his net worth concealed in the media.

Nevertheless, he is quite open about his relationship with the famous singer.

Sam Asghari has been dating the Toxic singer, Britney Spears since 2016 even though Sam is 13 years younger than Britney.

The couple first met on the sets of Bitney's Slumber Party music video in November 2016.

The speculation of the duo first aroused when Sam posted the moments of them enjoying a sushi date in November 2016, where Britney was poking her tongue out. But Sam deleted the image later.

Anyway, Britney confirmed their relationship by sharing a photo of Sam on his birthday. In the caption of the picture that was posted on 23 March 2017, Britney quoted Sam as her "Baby."

Since then, the duo's sweet romantic gestures for each other started flooding their social media accounts. Britanny timely flaunted her relationship with boyfriend on her Instagram by sharing their together moments - be it romantic dates or fun pool sessions. Sam even visited Britney in Japan while she was on tour, which raised significant eyebrows regarding their connection. A source notified to US magazine that Briney had previously sworn to never be in a relationship, but Sam appeared to change her decision.

Engagement Rumors Not True But Brittney Spears Eager To Be

Interestingly, the pair were also rumored to have engaged after Brittney hit the beach during her vacation in Hawaii with her two sons and a ring on her finger in January 2018. The ring led to her followers to speculate on their secret engagement. Well, the duo has not shed any comments on their engagement rumors, but it came to the light that she and Sam are already planning to have a child together. In February 2018, a source revealed that the Grammy winner had expressed her will to have a baby girl with Sam.

Later, as it turned out, it was known that Brittney and Sam are not engaged as of yet, but Brittney wants to be engaged soon. According to the wikis from the hollywoodlife.com, Brittney, devastated because of having to move out of her home in Thousand Oaks, California, does not want to wait anymore--life is too short for that--and wants to start the married life as soon as possible.

And Sam, seeing how much in love he is with Brittney, is bound to comply with her wish; it is only a matter of time before the couple is bound on not only the engagement ties but on holy matrimony.