Josephine Skriver Diet & Workout Regimen That Got Her Victoria's Title! 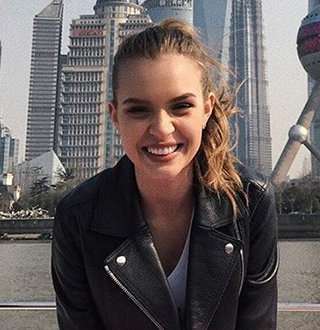 Model Josephine Skiver-Karlsen achieved success through her perfectly toned body. All thanks to her strict workout and healthy diet which helped her get this far. Recently, her modeling career has taken a toll. She created a buzz in Hong Kong when she opened the Victoria Secret's flagship recently in July 2018 alongside supermodel Martha Hunt.

Josephine Skriver was born on 14 April 1993 and is of Danish nationality. She was both born and raised in the capital city Copenhagen of Denmark. She belongs to Danish-Dutch ethnicity.

You May Also Like: Tyra Banks Split Before Getting Married; Photographer Boyfriend Out Of Picture

Skiver has a unique family unlike many of us. She was born to gay and lesbian parents; her lesbian mother Mette Skriver, an IT analyst and her gay father, a marine biologist. Josephine was born through In vitro fertilization (IVF) in her hometown of Copenhagen, Denmark.

She has a younger brother named Oliver Skiver who shared a similar process of birth.

Both her parents married different partners after she was born. She often brags about having a bonus set of parents. She also has a younger brother Oliver, who was also conceived the same way she was.

Born to an IT analyst mother and a marine biologist father, she has pursued a very oblique profession, modeling, in which she has made a name for herself.

At the age of 15,  while on a trip to New York with her soccer team, Josephine was discovered about her modeling potential. After a while, she was officially signed by an international modeling agency based in Copenhagen, Denmark.

Not only that but she was consequently approached by other agencies outside of Denmark too. However, focusing on her education, she decided to stay in school. In 2011, after finishing school, her modeling career kicked off.

In 2011, after completion of her school, she became serious about her modeling career. Her debut in the modeling industry was when she walked for Alberta Ferretti for his Fall/Winter 2011 and closed for Prada.  With that, she also walked the ramp for many prominent designers like Gucci, DKNY, Calvin Klein, and many more.

After being Victoria's Secret lingerie model in 2013 and Vitoria's Secret Angel in February 2016, her modeling career skyrocketed to a new level. She has been a prominent feature of various campaigns of top brands starting from Chanel, Michael Kors, MAC, Tommy Hilfiger, and so on.

She has walked for more than 300 shows and modeled for some of the biggest fashion brands. She has been on the cover and featured in reputed magazines such as Vanity Fair, Elle, and Vogue. Simply said, she has been modeling as the leading supermodel in the world of fashion.

For a young model, who is just 25 years old, Josephine has been able to amass a total net worth of $12 million. All the credits go to her modeling contracts, campaigns, and ads. With such a successful career in the world of fashion, it is no surprise that she has a massive net worth.

Josephine is proud of her biological parents, who have embraced their sexuality. She has publicly advocated for LGBTIQ communities. But she has always been very proud and open about her parents. In an interview with Buzzfeed in 2013, she said:

It's always been me that's dragged my parents to the gay pride parade because I've always been so proud of them. We call ourselves rainbow kids

She has covered quite a name for her as an LGBTQ advocate, and for her endeavors, in 2015, she was appointed as the celebrity ambassador of organization Family Equality Council ad its Outspoken Generation Program.

Talking about her love life, it is as stable as her professional life. Although unmarried, she is dating a famous American songwriter and singer Alexander Deleon since 2013.

A quick look at their Instagram tells us that they are very fond of each other. They mention each other on various social media sites. On 14 February 2016 boyfriend Alexander, who goes by the handle (@bohnes) on Instagram, wished Josephine Happy Valentines day with the caption:

This photo was taken by my valentine. <3 @josephineskriver

She is very happy with her partner now, living together in their home in Nashville. The house they live in is beautifully designed, with magnificent interiors and cozy atmosphere, a joy they both relish together.

The live-in together have made their bond, even more, stronger, and they are more caring for each other and their relationship is best described as 'lesser the distance, the more the love.'

Josephine and her boyfriend Alexander have taken a new step in their relationship, making the commitment towards each other. The couple got engaged on 26th November 2018 during their trip to Finland.

She shared the news to her followers through an Instagram post about the proposal made by her boyfriend underneath the Northern Lights. “I SAID HELL-FREAKIN’-YES!!!!” she wrote alongside the Instagram pictures of the proposal, flaunting the stunning area where Alexander proposed her. Recently, she went to Equador with her fiance and shared a kissing picture with of them on her Instagram in December 2018. It looks like the couple is soon to tie the wedding knot, but the exact date is yet to be revealed.

Josephine's Secret To Her Toned Figure

When it comes to her successful modeling career, her strict routines and workouts deserve a massive amount of credits.

From her favorite face masks to her weightlifting milestones, the model has something to say to it.

Work-out:  Josephine Skriver joins in with Diana Madison on her youtube channel 'Diana Madison' to share a proper idea of post-birth weight loss. (Published on 14 March 2018)

Starting her day with a morning workout, Josephine describes herself as a morning person. With that, she loves to have a heavy breakfast diet, and sometimes twice instead of lunch. In an interview with The Cut on June 2017 she said;

I love to start, especially after a big workout, with protein and a little bit of carbs. On the go, sometimes it’s nice to have oatmeal packs.  I love eggs and veggies in the morning but sometimes it’s yogurt and granola.

When it comes to her workout routines, she is a big fan of lifting weights. She even added that lifting weight made her arms stronger than before.  But it took a lot of time to figure out what was beneficial for her body. She said:

I’ve always been active. But it’s been a long process to figure out what works for me. What worked was lifting weights. It did wonders for my body, I really notice how it has changed the shape.

In an interview with Vogue Magazine in May 2018, she revealed soccer was a big part during her school years. Moreover, she added her long legs helped her run and get that perfect fashion model body. During her tough workout sessions, she lifts a 20kg kettlebell but barely breaks a sweat.

Interesting: How Rob Marciano Is Gay As A Married Man With Wife & Family Is Special

When you're a model, perfect skin is something that plays a vital role, and Josephine is blessed with a flawless complexion. According to her, she just washes her face in the morning and evening with a light scrub and then puts on moisturizing cream.