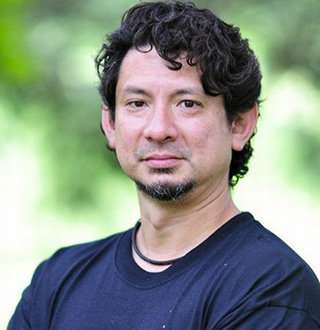 American reality star Doug Marcaida's handling of knives and blades entertained the audiences of History channel for years now. Did Doug's fans ever find his secretive personal life as amusing as his stunts on TV?

The Philippines native is an edged weapon combat specialist who designs some of the world’s deadliest blades and knives. He is the founder of Marcaida Kali, evolving martial art system in the Philippines. Doug also works as a judge in History Channel’s series Forged in Fire, an original competition series which features epic weapon and blades on screen.

To help our readers get acquainted with the Forged in Fire star, we have here compiled a list of wikis on him. First, we look into his ethnicity, age, birthday and his background in knife handling. Later, we delved into his net worth and the relationship between him and his family members, especially his wife.

Martial artist Doug belongs to Filipino ethnicity. The middle-aged man is a highly skilled martial artist who has also studied fighting styles and techniques around the world.

History Channel's Very Own:- Mike Wolfe On "Ultimate Joy" From Getting Married To Wife! Meet The Wolfe Family

He has not revealed much detail about his personal life and family including his birthday. But he has mentioned that his father is a gunman.

As per wiki, he is the founder of Marcaida Kali, a martial art technique which is heavily based on South East Asian styles. He also designs some of the world’s fatal blades and owns a knife shop called Marcaida Kali where he sells his line of knives and other combat accessories.

2. Doug Marcaida's Injury Prone Profession Credited For His Net Worth

The artist serves as a judge in the History Channel’s original competition series Forged in Fire. Though he appears to be the most kind of all the judges, he is a dangerous man.

Knife & Injury:- History released a sneak peek of season three of Forged In Fire on its YouTube channel (Published on 6 April 2017)

He deals with the most dangerous blades which can even result in vicious injury. But Doug is conscious about the danger and teaches others about its consequences. He even mispronounces the word ‘Kill’ as ‘Keal,’ and he believes it’s for a perfect reason. As per him ‘Keal’ stands for ‘Keep Everyone Alive.’

Being a founder and owner, his net worth probably must be in thousands. However, the exact details of net worth remain confined.

According to Doug's bio on History Channel, he specializes in hand-to-hand combat and battlefield strategy. One might add that the Forged in Fire judge is the walking encyclopedia in the evolution of weapons of war.

Despite being edged weapon combat specialists, neither he nor his fellow judge, Wil Wilis knew how to forge until the third season of the show Forged in Fire. They were taught by J. Neilson, a fellow judge on the show.

History even released a clip chronicling the whole debacle. Doug can be seen appearing really frustrated with the task at hand throughout the duration of the whole clip. He was quoted as saying:

this is why I pay people for this!

Someone who is as highly skilled in the martial artist as Doug Marcaida is, one would assume he can pierce through any women’s heart with his fearless character of handling blades.

As of his love life, he has remained quite cautious but has mentioned his children on social sites which urged that he is most probably a married man.

Edged weapon expert Doug has maintained a private love life. He has kept his married life under the wraps. However, it’s not that easy to keep things away from the eyes of followers these days.

Doug is the father of three sons and timely updates his social media with pictures of his children.

Recently in January 2018, Doug mentioned his children on his Instagram. He shared a picture of his father, and his younger and middle children declaring his father as a grandfather. He also cited in the comment that his boys are studying blades. So as per his post, he hinted that he is a married man and also shares children with his wife. He mentioned the name of his middle and youngest son DJ and Jaden respectively; however, he has not disclosed the identity of his other child.