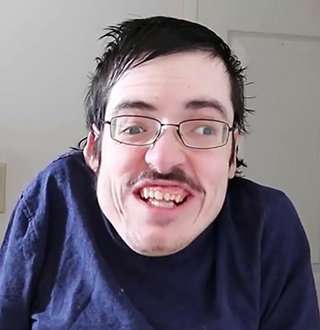 Canadian social media star Ricky Berwick has been entertaining the folks despite the unfavorable medical condition.

The Ontario native has made his name on social media as a self-proclaimed entertainer, best known for his comedic videos and social rants on Twitter, Instagram, and YouTube.

Here are some interesting wiki facts regarding his parents, medical condition, youtube career, girlfriend and net worth.

Ricky Berwick was born on 23 April 1992 to parents Barbara and Devon Berwick. Since his birth, he has been suffering from a physical disability that limits his movements.

The medical condition that the star is suffering is known as the Beals-Hecht syndrome. People with such syndrome typically have an arm span that is greater than their height and very long fingers and toes.

Because of his abnormal medical condition, he makes use of a motorized wheelchair. His bio on his Twitter reads "Your not so normal video entertainer."

Ricky used to make funny videos with his webcam from his early age. In May 2007, he created a Youtube channel named Ricky Berwick, and his popularity started to increase. The videos comprise of vines and the fun stuff, which yields millions of viewers in a short duration of time.

While doing videos, he noticed that the content and skits never stuck, which led to a gap of over nine years from uploading to YouTube.

In 2016 summer, Ricky shared a video of yelling and eating McDonald's french fries on his Twitter, which went viral. The video was even stolen and re-uploaded on Facebook, and it earned millions of viewers.

Ricky continued uploading videos on Twitter, and later that year he rebranded his YouTube channel into his name and began to release videos at a consistent and rapid pace.

Where is his mom: Ricky uploads a funny Youtube video of searching his mom in May 2018 (Video: Ricky Berwick's Youtube Channel)

Similarly, he asked his followers to be his girlfriend to date on the social sites in March 2018.

Replying on the post of another YouTuber Eugenia Cooney, he mentioned her as his girlfriend and requested to unfollow her in April 2013.

However, his real girlfriend was far from the media eyes so far. That was until Ricky started mentioning a rookie YouTuber whose channel names goes by the username, Volinra. She has uploaded almost 30 videos on her channel garnering 3000 subscribers since joining YouTube in September 2016.

Apparently, Ricky edits her videos and she's aware of giving him credits as well. And Ricky doesn't forget to throw in sarcastic comments. In one video he commented, 'did you edit dis video?? It's very well made' while on the other he simply said, 'didn't watch.'

Another thing that had his fans taken aback was when Ricky uploaded a video of a girl making him a sandwich on Twitter on 16 September 2018. The girl, as you might have already guessed, was Volinra and Ricky made sure to burst the fans' bubble by captioning, 'so @Volinra is not my girlfriend BUT she did make me a sandwich lmao. goodnight fam.'

He did clearly mention that she wasn't his girlfriend but who knows? And for the record, the fans are not happy as they're claiming that the girl is just hungry for followers.

Rick has amassed prominent part of net-worth through his earnings from his YouTube Channel. As the channel has hoarded the enormous subscribers of more than 1.2 Million, it makes his estimated monthly earning that ranges from $3.7K - $59.9K.

Moreover, he has partnered with the DXRacer company, a manufacturer of car seats for luxury sports cars. The revenue earned by selling over 100 chairs as part of the deal has undoubtedly increased his net worth.

As of 2018, he has accumulated a staggering net worth from his internet career. The talented internet sensation has not let his disability limit him to make the name in the entertainment field.