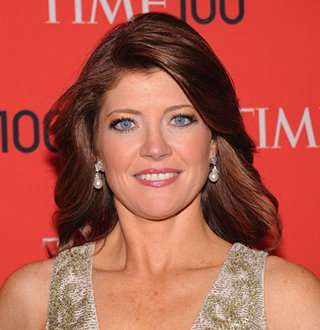 American print and television journalist Norah O’Donnell met her future husband during his freshman year at the college. They have been relishing a content family life along with three children.

The Washington D.C. native is presently working as the co-anchor of ‘CBS This Morning.’ She is famed as one of the most successful women anchors in the country, having won Sigma Delta Chi Award’ and ‘Emmy Award,' for her work. The talented journalist was born as Norah Morahan O’Donnell on 23 January 1974 to parents Norah O'Donnell and Francis O’Donnell, a doctor.

She grew up in San Antonio with her family that includes her sister, Mary O'Donnell and a brother Francis O'Donnell.

She has a beautiful relationship with her parents and sister, who also happens to be her best friend. Norah, who stands at the height of 5 feet 6 inches (1.6 meters), is a graduate of the Georgetown University and has received a Bachelor of Arts in Philosophy as well as a Master of Arts in Liberal Studies.

On her recent birthday, Norah made contributions to skin cancer research and urged her fans to take the risk of skin cancer seriously.

This Is How She Gained Notoriety; Her Time In NBC, CBS.

Norah rose to fame in the TV industry with her more than a decade-long contribution at NBC, where she worked as a Washington correspondent, host, reporter and also was the network’s White House correspondent during the 2004 presidential campaign.

O’Donnell was awarded the prestigious Sigma Delta Chi Award in 2001 for her reporting for Dateline NBC from the Pentagon on the night of September 11, 2001, when she reported a piece called “DC in Crisis.”

Moreover, both Norah and her husband, Geoff have co-authored the bestseller ‘Baby Love: Healthy, Easy, Delicious Meals for Your Baby and Toddler’ in August 2010.

Also, in 2010, Norah with her husband Geoff bought a $3.2 million home in D.C.’s Wesley Heights. They were planning on redoing their kitchen in 2013, but Norah was offered a job at CBS News and had to move to New York.

O’Donnell left NBC for CBS in 2011 and served as CBS’ White House correspondent for a year before being named a co-host of CBS This Morning in 2012.

Norah is currently serving as the co-anchor of 'CBS This Morning;' a position she held since July 2012, when she replaced Erica Hill.

In a recent scandal that has plagued many Networks over the past year, O'Donnell was a vocal supporter for the sexual harassment allegations against longtime CEO of CBS Leslie Moonves made by several women working at the network but was also confident that Moonves would never do such an awful thing and that a deep investigation was required. The allegations made against Moonves saw him exit the network. Norah has stated that the allegations have hurt the morale of the network and that the truth would eventually be revealed through a detailed investigation.

More On CBS: CBS’ Juliana Goldman Marrried With Husband! Plus Family, Baby To Salary and Net worth

The scandal has left a big hole in the network. After the departure of top executives from the network, CBS decided to put their faith in one of the top females producers in charge in the form of Susan Zirinksy. Zirinksy, who took over as president of the network from David Rhodes, has voiced her opinion on appointing a woman to another top post at the network. And she sees Norah O'Donnell as the perfect candidate to do so. Susan is looking to appoint Norah as the host of the Evening News on CBS. It seems the scandal might have played a little favor for O'Donnell.

Norah is married to Geoff Tracy, an author, award-winning restaurateur, who operates six famous restaurants in the U.S. The restaurants serve over 750,000 people every year and employ more than 400 amazing people.

O’Donnell and Tracy were college sweethearts, having met during his freshman year. According to The Washingtonian, he saw her and her roommate in a cafeteria line and eventually their relationship grew.

The two married in June 2001 and in May 2007, Norah gave birth to twins named Grace, a daughter and Henry, a son. Just 13 months later, in 2008 she gave birth to their second daughter named Riley.

Norah once mentioned that without her spouse's support, she couldn’t have been as devoted as she is now. When asked about work-life balance in an interview, in July 2013 she told that she doesn’t care for the phrase work-life balance.

She believes, work and life both are supposed to have equal importance, and she spends her time equally with both the significant aspects of her life.