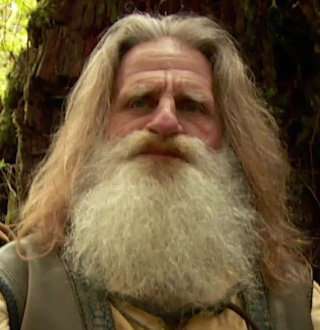 Mick Dodge, often referred to as the Barefoot Sensei or the Barefoot Nomad, gained fame when National Geographic channel aired the show, The Legend of Mick Dodge which was based on him. On the show, the main focus was the ex-Marine-turned-nomadic-outdoorsman as he lived his day-to-day life in the wilderness of the Olympic Mountains in Washington state.

The TV program explores the unique lifestyle of the man who left behind the modern behind world more than 25 years ago. Ever since he gave up the comforts of contemporary life, he has been walking barefoot in the woods. While many people must be thinking it is impossible, he made it possible and is still alive to live the same life till the very day he can.

Mick Dodge was born on  August 29, 1951, in Washington’s Olympic Peninsula where he spent most of his childhood with his grandparents. However, any information regarding his family is still under the rocks.

Talking about his education, Mick graduated from Kubasaki High School where he trained martial arts and adopted many Buddhist principles as well. Later on, he served in the Marine Corp for almost six years, following his father's footsteps. Later on, he did a 9-to-5 job as a mechanic in Fort Lewis, Washington.

Does Mick Dodge, The Barefoot Sensei, Have A Wife?

Mick Dodge became profoundly disillusioned with the daily life and rush of modern society. So, in the year 1991, he took the decision and left the modern world and civilization behind and began a new path.

He went back to the Hoh Rainforest of his childhood where he decided to live primarily off the land.

Interesting: Karen Davila Bio: From Family Life With Husband To Awards And Height Still Alive? Mick Dodge eating a worm as he wonders in the forest (Picture: kiwireport.com)

As Mick had left the modern world at the age of 40, it is hard to speculate whether he is married or not. Moreover, he does not like talk much about his personal like in interviews as well. So, it seems as though he was never married.

Mick continually claims that he does not use any currency in his everyday life. Along with his decision of not using any money, his unusual decision to go shoeless is, however, rooted in several reasons.

Neither Mick has a bank account, nor has any monetary connection with the modern world.

But he inevitably gets paid by the National Geographic channel for the reality show, The Legend of Mick Dodge. Moreover, the amount of money he gets from them is transferred to a community called the Olympic Mountain Earth Wisdom Circle.

Mick's net worth is calculated to be around $150 thousand. That’s a hefty sum of money for a wanderer like him.