Entertainment
by HM Writer Published:  August 08, 2018
He began the news aggregation site, The Drudge Report...He continues to deny that he is gay...when answering questions about his sexuality, he revealed that he had nearly got married...According to wiki sites, he took many odd jobs...boasts a whopping net worth of $150 million...

Matthew Nathan Drudge, an American political commentator, never fails to pop up in the gossips, whether that be about his coming out of the closet, or his married life.

The American commentator works as Internet News Editor, mainly for his news aggregation site, The Drudge Report. He has hosted shows on Fox News and various radios garnering eye glances from everywhere.

To spill some more information on Matthew Drudge’s sexuality, available reports, a bit of his personal life and a lot more history of his romantic involvement, here are some quite amusing wikis.

Born on October 27, 1966, Matt Drudge was raised in Takoma Park, Maryland, near Washington, D.C. He is the single child to his parents who are Democrats and worked for the federal government.

The parents divorced when Drudge was only six and started living with his mother. He had very few friends and was frequently described as being a ‘loner’ when he was growing up.

According to wiki sites, he took many odd jobs such as night counterman at a convenience store, telemarketer for Time-Life books, McDonald’s manager, and sales assistant at a New York City grocery store.

Not a bright student, Drudge said that he "failed his Bar Mitzvah," and came 341st out of a class of 355 from Northwood High School in 1984. He describes his education as "more than adequate curriculum vitae for a post at 7-Eleven.”

2. Matt Drudge Made His Name From ‘The Drudge Report’

Drudge was not entirely known until he began the news aggregation site, The Drudge Report, which started as email notes sent out to a few friends.

The email newsletter that was distributed transitioned slowly from entertainment gossip to political gossip. By 1997, Drudge had 85,000 subscribers to his email service. The site gained a lot of popularity, and Drudge first received national attention in 1996.

Capitalising on his newfound fame, the blogger hosted shows in various public platforms including Fox News Television, Radio Talk among many others.

He also wrote a book titled ‘Drudge Manifesto’ with Julia Phillips in 2000, which reached the New York Times Best Seller list. The book features a copy of a Q&A session conducted at the National Press Club in 1998. It also contains copies of emails sent to Drudge by his readers.

3. Matt Drudge's Huge Net Worth Made Off Drudge Report

The scoop hunter has made a lot of money during his career and boasts a whopping net worth of $150 million. Looking at his net worth, it’s certainly no surprise that Drudge bought a Miami Jungle Home for which he paid a $1.45 Million straight cash.

4. He Is Never Far From Controversy

The American News aggregator has presented news on various topics on his own website, or on other popular shows. He’s had his name on HuffPost or Newsweek.

Though, his reports are often quite criticised but that doesn’t stop him from gaining popularity. Vox criticised the Drudge Report for choosing a very misleading photo for a child immigration story.

The Drudge Report used a 2012 photo taken by Christiaan Triebert. Triebert mentioned that Drudge’s use of the picture was ‘an obscene misrepresentation of what the photo actually depicts.’

He also took issue with Drudge not crediting him for the image, and for Drudge’s commercial use of the photo - both of which violate the authorizing terms under which it was uploaded under.

5. Matt Drudge Is Listed As One of Most Influencing Gay Men and Women

There's still no confirmation of Matt being a gay but there are countless mentioning of his sexuality throughout the talks.

Drudge's critics, like gay American writer and national talk radio host Michelangelo Signorile, point to the assertions of homosexuality levelled at Drudge himself by David Brock of Media Matters in his memoir, and by columnist Jeannette Walls in her book Dish. 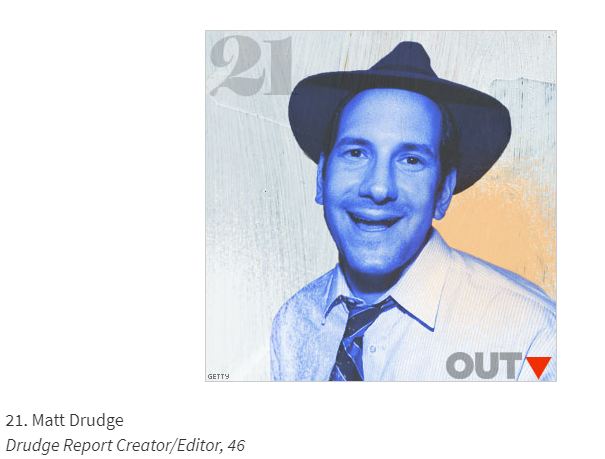 Ranking High: Matt Drudge was ranked 21 in the list of Influencing Gay Men and Women of 2013 in the Out Exclusives (Photo: out.com)

Walls wrote that Drudge had a long homosexual relationship with Washington D.C. landscaper, David Cohen, which was supported by Out, as it said,

"Although he has not publicly acknowledged his sexuality, the 42-year-old journalist has enjoyed a long-term relationship with a male landscape gardener."

Despite all the tittle-tattles, Drudge continues to deny that he is gay, telling the Miami New Times in 2001 that "I go to straight bars, I go to gay bars.”

There's still no confirmation of Matt’s apparent homosexuality. The least that can be deciphered from everything is that he isn’t dating anyone at the moment. And if he is a gay, he hasn’t yet come out of the closet.

Discover: Andrew Napolitano: Married Man Or, Gay? Plus His Net Worth And More

Apart from his sexuality, Matt Grudge's most frequently asked question, is his married status. The news scooper, having broken numerous breaking news as it happened, has yet to open up about his married life or his wife.

However, he did hint about a possible affair in 2005 when answering questions about his sexuality; he revealed that he had nearly got married at one point in time.  In 2005, Matt told The Sunday Times,

Apart from that one instance Matt has yet to respond to his married claims and seems busy scooping for news rather than a wife.