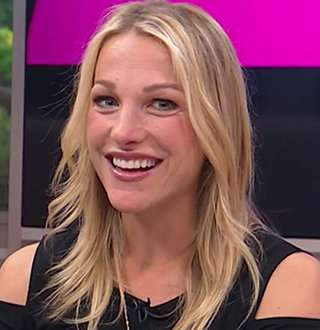 The secret of Lindsay Czarniak's dating life was revealed when she got pregnant. Little did she know that introducing her husband to her workmates would create a story of her love life.

The Pennsylvania native is known for her work as an anchor with ESPN's SportsCenter. Lindsay was enlisted as top 25 SportsCenter anchor of all time in 2016. She was the host and sports desk reporter for NBC Sports, who covered the 2008 Summer Olympics held in Beijing, China.

Lindsay Czerniak is one of the most celebrated names in the American sports journalism, a feat even more glorious for a woman.

Lindsay Czarniak Got The Journalist Gene From Her Father

After her parents moved to Northern Virginia when she was five, she attended Centreville High School and earned a Bachelor's degree in Media Arts and Design with a concentration in journalism from the James Madison University in 2000.

Lindsay Czarniak Career, Covered Almost Every Major Sports In The US

Lindsay began her professional venture as an intern at CBS affiliated station WUSA where she joined CNN as a production assistant. In 2006 she made a breakthrough in her career when she was appointed as the co-host of The George Michael Sports Machine.

After working for NBC as sports desk reporter, she joined ESPN in 2011. She spent about six years in ESPN/ABC and became the first woman to cover the 2013 automobile race, Indianapolis 500. Her contract with ESPN expired in 2017, after which she spent a little time contributing for the NBC Washington's Superbowl coverage.

She has also covered the 2008 Summer Olympics in Beijing for NBC.

The long-serving television host has earned the splendid amount of income associating to various renown stations. She earns an annual salary of $1.5 Million, that contributes to her net worth of $3 Million.

Lindsay got married to 39 years old MSNBC anchor and NBC News correspondent Craig Melvin on 15 October 2011. The wedding was convened at the Church of Holy City, 16th street in Washington DC.

Lindsay and Craig met for the first time when her colleague introduced him after he arrived at NBC 4 broadcast completing the set at the 2008 Beijing Olympics. Though they started dating in 2009, they kept the relationship secret from their friends.

In February 2014, Lindsay made an on-air announcement that she is pregnant in the ESPN media. Talking about the exciting moment, she opened that her husband helps her to fulfill crazy pregnancy cravings that came at wee hours of the night. This announcement turned her love story into the sweetest real-life love story there was.

The couple welcomed their first child; a son named Delano Joseph on 10 March 2014. Then she gave birth to a daughter, Sybil Ann, born on 5 November 2016.

In 1st April 2018, Lindsay posted a family picture on her Twitter wishing happy Easter to her followers. Similarly, she wished her husband on his birthday on 21 May 2018 via an Instagram post stating that he is a reason for her smile. She often loves to capture the adorable moments of her kids and does not forget to post on her social sites.

With two adorable children, a loving and craving-fulfilling husband, happily married life and great career surrounding her, Lindsay Czarniak is having a life not many people have.