Kym Whitley Family: Son With Out Getting Married, Want To Adopt Husband 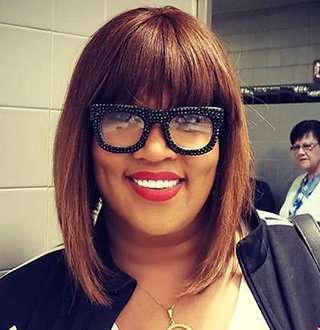 American comedian Kym Whitley changed her view on dating and relationships as she stepped into the role of a mother to her adopted son.

Kym Whitley is a well-known actress and comedian who played her roles on television sitcoms like Animal Practice, The Boondocks, Young & Hungry and The Parkers.

Promoting Show: Kym Whitley talks about dating and the 5th season of her show, Young & Hungry on The Real Daytime (Published on 8 March 2017)

Kym was nominated for Outstanding Supporting Actress for 2004 BET Comedy Award in a Box Office Movie for her role as Ormandy in the 2003 comedy film, Deliver Us From Eva.

Born on 21 July 1961, Kym Elizabeth Whitley was raised in Shaker Heights, US, along with her two older brothers. Graduating from Shaker Heights High School in 1979, Kym attended Fisk University in Nashville, Tennessee.

Kym performed her first gig in 1992 in an episode of Vinnie & Bobby, and landed her big break in comedy in 1989, as she starred in Shelly Garrett’s popular play, Beauty Shop.

As she kept on improving and catching attention, Kym played major acting roles in My Brother and Me and Sparks. Eventually after making guest appearances on television sitcoms like The Parent ‘Hood, Married… with Children, That’s So Raven and much more, Kym became the host of BET show, Oh Drama in 2000.

The 57-year-old actress’ documentary series, Raising Whitley on the Oprah Winfrey Network premiered on 20 April 2013 that gained 1.2 Million views and was made the fifth most-widely viewed premiere of the network.

Kym Whitley’s Net worth In Windfall

According to sources, Kym Whitley has got an estimated net worth of $2.5 Million, which doesn’t come as much surprise.

Kym has pulled in a lot of riches with her comedy-acting career in big platforms and especially from the American sitcom, Sparks, which aired 40 episodes in two seasons.

Her television series, Raising Whitley that gained a total of 1.2 million views, brought her a windfall of wealth.

Kym even bought a walled and gated estate in Tarzana for $1.25 million, and it’s nothing to be gasping about as she has deep pockets.

Kym is a mother to her adopted son, Joshua Whitley. In 2011, Kym was confronted by a huge and important decision regarding the adoption of Joshua.

Although there was a slight hesitation, Kym didn’t take much time as her whole family rooted for her to adopt the baby.

The series showcases Kym raising her son with the immense help and support from her family. Blessed family: Kym posts a picture with her son and Latasha Holts on Instagram on 15 May 2018 (Photo: Kym’s Instagram)

As of now, Joshua is already seven years old and is enjoying a beautiful life with his adoptive mother and family on and off screen.

Adding to the affection for her son, Kym doesn’t miss the chance to share the moments she spends with her whole off-screen family including her father, brothers, and cousins on social media.

On the other side, Kym also never fails to bring laughs and smiles to her family, onscreen or offscreen. She always reminds her fans about the fact that she’s grateful for a family like hers, whether it’s posting family moments on her social media sites or mentioning them on interviews.

Kym Dating Someone: Thoughts On Dating

In June 2018, Kym did reveal that she was dating on the Steve TV Show. But, it turned out to be a joke as when Steve Harvey asked the cliche question, ‘Are you dating anybody right now?’ and her answer was,

Yes, Steve. I am dating someone. But he doesn’t know that that I’m dating him.

Although Kim hasn’t been involved in a romantic affair for so long, she has mentioned in many interviews that dating someone has become different for her.

Now, the fact that American soap actor, Rodney Van Johnson took the role of being the fatherly figure for Joshua, it cooked some believable conjecture of him being married to Kym.

You Don't Want To Miss: Abby Miller On Large Family & Daughter Who Disappointed Dance Moms Star With Massive Net Worth

But the speculation only turned out to be useless as Rodney is married to wife, Carmen Obando, with two kids. And the reason why he wanted to be Joshua’s father is that he didn’t have a father in his life.

As she’s got a son now, she doesn’t want to tread on thin ice with short relationships because if her son came to like the person, she’s dating, and they broke up, it would be hard to explain the separation.

So, it's going to take some time before Kym finds her destined one and introduces him to her son as his father and Kym's future husband.