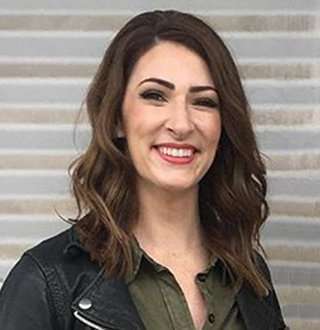 Katy is an actress best known for her role as an extremely narcissistic teacher, Chelsea Snap in an American television sitcom Teachers on TV Land and she is also the executive producer and writer of the series alongside her partner Katie O'Brien. Katy is part of the critically acclaimed comedy group, The Katydids.

Katy And Katie: Katy Colloton And Katie O'Brien dropped by the studio of Hollywire to chat with Ashley Brinkman about their show "Teachers."(Published: 14 Aug 2018)

Born in Chicago on 11 October 1984, Katy was raised in Leawood by parents Pat and Pat Colloton. Her father worked in life insurance before retiring 11 years ago. Her mother was a Kansas state representative for nine years from 2004 to 2013 and now works for the Office of Kansas Attorney General as director of the anti-human trafficking unit.

According to wiki sites, Katy graduated from Blue Valley North High School at the age of 17 in 2001. She received B.A. in theater and psychology from Vanderbilt University.

The 33-year-old actor is still not married and doesn't have a husband. However, there is no famine of love and motivation in her life as she is blessed with an inspirational family.

An only child, Katy studied psychology just like her mother but choose an entirely different career. However, her parents supported which eventually led her to a successful career.

Katy, who is just 33 years of age has undeniably garnered the notable amount of fortune from her acting career. Moreover, she is the producer of various series and has assuredly accumulated a significant amount of income from the success of the show. She currently relishes her opulent lifestyle with the astonishing net worth.

Initially, Katy used to perform with the Second City House Ensemble, iO Chicago, The Playground Theater and The Annoyance. She has made numerous comedy videos as a part of The Katydids. Those videos have been featured on sites including The Huffington Post, MTV, Cosmopolitan, Perez Hilton, College Humor, LaughSpin, and Italy’s Vanity Fair. A drunk Katie appears alongside co-star Caitlin Barlow in the episode of Teachers. (Photo: Latimes.com)

She has also performed in several feature-length, and short films including the 2010 Vimeo award-winning series, Break-ups, and the TBS Laugh Out Loud Official Selection short, Just Friends.

The improviser got her prevalent career break in 2016 when she became the main cast of an American television sitcom on TV Land, Teachers. The first season of the series was initially released on 13 January 2016.

Back on 9 May 2016, Katy recalled her mother, as her true inspiration behind her success and mentioned her as the person she’s ever known on the special occasion ‘Mother’s Day.’ Not just Mom, her father was also compassionate towards her throughout her career and mutable life.  Recently, on 17 June 2018 on the occasion of ‘Father’s Day’ Katy expressed gratitude towards her father for always believing and supporting her.

Here We Present You An Inspiration- Miss Katy Colloton!

As the creators, writers, actors and executive producers of their own show, Teachers on TV Land, both Katy and Katie are at a hoarding success in thier career. But this success has not come to them at an easy, not at all. This success is the prize they celebrate as a result of persistence, an outcome of not being intimidated by 'no'!

Both of them were fascinated by theatre and performances at a young age. As they grew up in the neighborhood of Midwest, they thought of pursuing a career in the field. They never missed an audition for musical or community theatre production offered by Overland Park, Kansas.

Apparently, their mothers were the only one who would like their act. So, they faced lots and lots of rejection. The only roles they would get were the non-speaking ones.

But it was either their pride or delusion, they cling on their dreams of becoming actresses/comics, giving up never crossed thier mind. And this led to the birth of Katydids and the rest is history.

Some Wikis Of Katy Colloton