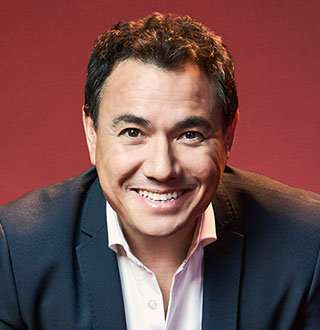 Unlike most comedians like Jon Cozart, Sam Pang didn't seem to need to make a coy joke about his family. That being said, it doesn't necessarily mean that he doesn't love his Italian wife or that his family isn't his source of inspiration.

The Melbourne native is an Australian radio and television presenter, writer, producer, and comedian. He is best known for comedy series including Kane & Disabled (2012), The Match Committee (2011) and a short film called Alone, Together (2008). His fan-favorite show, Driving with Sam Pang, after a one-year hiatus in 2017, was announced to air from 9th August 2018.

Driving With Sam Pang: Sam Pang is back in Melbourne and in the car with comedian and Carlton superfan Dave Hughes (Published on 25 Jul 2015)

Sam intertwines his quick wit with his hilarious point of view to any situation to produce a show that is unique and humorous. His first television hosting role was in 2009. He hosted a quiz show based on history-related topics called ADbc.

He features as a regular guest on Network Ten’s comedy program, Have You Been Paying Attention. Aside from that, he also appears on different comedy shows including Friday Front Bar, Agony, Santo, and Sam and Ed’s Total Football.

Studio 10's Denise Scott To Sam Pang: “You’ll be on Studio 10 one day and you’ll be happy”

On 20 August 2018, Sam Pang featured Denise Scott, the co-host of Studio 10, on his comedy program, Have You Been Paying Attention.

The two comics shared the stage with other fantastic comics in Tony Martin and Tom Gleisner.

Denise's appearance on HYBPA has caught the viewers of the show by her humorous bits as Twitter users are applauding her for her comedy.

At one point, she walked off stage until she was quickly stopped by Gleisner. That is when she complimented Pang, stating,

It took me till 63 to get a job on that show Sam and now you’re taking away the little bit of glory I’ve got. Oh, Mr. Sam Pang on everything. You’ll be on Studio 10 one day and you’ll be happy.

It seems like Pang is finally getting the recognition he deserves!

Despite being born in Melbourne, Australia, on 3 November 1973, Sam Pang comes from a lineage of Chinese hierarchy. However, he has kept his family roots a secret.

Aside from that, he was a former Australian rules football player for the Collingwood under-19s team in 1991. He later went on to play country football in regional Victoria and Tasmania for several years.

At Age 28, Sam Pang Had His Breakthrough As Radio Host

His career’s initiation began through his networking skill and his natural talent for humor. Before he became a national star, Sam was working in a bottle shop.

He would sit in reception and answer phones every Wednesday for three hours. It might sound like a tedious job; fortunately, through sheer determination, perseverance and a little bit of luck, he transformed that position into an opportunity to build contacts with entertainers from around Australia.

Popular: What Is Mckinzie Roth's Age? Married Life With Husband To Measurements

After that, he got to meet and talk to them;  they became his mentor and eventually his mates.

He took his first shot at a comedy career through community radio stations. He used his networking skills and contacted a producer from the radio show called The Marngrook Footy Show, who later invited Sam to help out behind the scenes. And from there, the dominos started to fall into the right places.

At the age of 28, after turning to radio hosting with support from his friends, he got his opportunity to co-hosted program called Triple R’s Breakfasters, where he went on to serve for five years.

Sam Pang along with Chrissie Swan and Jonathan Brown has been at the helms of Nova 100's breakfast show, Chrissie, Sam & Browny since 2015. The humorous trio's hilarious take on the everyday tales has been a big hit among the listeners and is one of the most listened shows in the whole of Australia.

And seems like the show has been hitting up the right notes among critics alike as it was voted as The Best Radio Show Podcast in 2018's Australian Commercial Radio Awards.

The awards held on 20 October 2018 adjudged the trio's show as the best among the rest of the shows, winning a glistening trophy. The show has previously praised for their hilarity and its uniqueness. Moreover, Sam and Cos broadcast of the 2018's soccer world cup had set the tournament alight thanks to their vibrant commentary and unique take.

Moreover, Sam Pang along with his partner in crime Jonathan Brown has been slated to tee off the Australian Open golf that kicks of on Wednesday, November 14, 2018. Seems like the much-loved radio jock is finally receiving the fame he deserves.

The primary job of a talk show host is to talk, which Sam does quite much when it comes to the topic relevant to his shows. Ironically, he can rarely be found blabbering about his family, let alone joking about them. It doesn't indicate that he has a grudge against his family whatsoever though.

More From Comedians: Jon Cozart - Guy With Girlfriend Hints On Gay Side! 'After Ever After' Singer's Detail

It merely implies that he prefers to keep his details including his wife and daughter to himself. If he did decide to make a joke about his family, it would turn out quite excellent. For instance, he is from a Chinese heritage - albeit being an Australian- and married an Italian wife.

On a serious note, after probably having the best day of his life on their wedding day, he shares a happy life with his wife. Furthermore, the couple also has a daughter named Sienna, in their family. The secretive man let slip during an interview with SMH in 2012 stating that the happiest day of his life was when she was born.