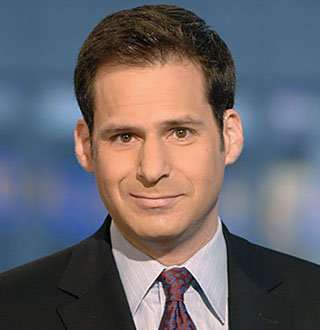 American news anchor, John Berman met his future wife while pursuing the University education. The college sweethearts kept their romance raging even after finishing college and eventually got married.

The Massachusetts native is a well-known face among CNN onlookers and is an anchor of CNN's news show, CNN New Day. He also serves as a regular relief presenter of Anderson Cooper 360°, another news show in the network.

He launched his professional venture at ABC News in a junior office post in 1995. Later, he became the long-term newscaster of ABC World News Tonight, serving from 1997 to 1999. He was appointed as White House correspondent of ABC after the inauguration of President George W. Bush in 2001.

Another One From CNN: CNN's Sanjay Gupta On Bright Side Of Weed! Along With Perfect Family He Shares With Wife

He also served as a regular contributor to ABC's various shows such as Good Morning America, World News with Diane Sawyer, 20/20,  and Nightline. After working for 17 years, he left ABC in 2012 to join CNN.

John joined CNN in 2012 as an anchor of the morning program Early Start alongside co-host Ashleigh Banfield and Zoraida Sambolin.  He also contributed as a reporter to various CNN programs which included the Early Evening Newscast, and The Situation Room with Wolf Blitzer.

Initially serving a weekday relief co-anchor, in March 2018, he was announced as the regular host of CNN New Day replacing Chris Cuomo. Chris departed from the show to present his analysis show, Cuomo Prime Time.

The unrelenting work he does with the CNN has been reflected on his earnings and net worth too. John receives an impressive paycheck from his stint at CNN since he joined the network in 2012.

With the average salary of a CNN employee listed at a decent $66K per annum, John as one of the most known faces in the network enjoys a salary higher than that.

Read Also: Wolf Blitzer's Salary And Net Worth Is Massive! Among Richest Journalists?

His incumbent at the CNN New Day earned a cool salary of  $2.5 million with the network, and as his replacement, John also commands a similar wage.

As a news anchor for a highly reputed network like CNN, it is not a surprise that Berman would open big mouth on President Trump's every controversial statement which unsurprisingly has maintained a tendency to occur frequently.

The anchor was quick to fire back at President Donald Trump- who in a recent interview with Fox News Channel called out on Democratic Florida gubernatorial candidate Andrew Gillum a “thief”.

The president was just being who he is- take it as an offense or not but its the truth, but John had a hard time processing the remark. It was utterly disgusting to him.

Look, that is a racial dog whistle pure and simple. He did it on Twitter, he tried it out in New Haven on Twitter earlier in the day, talking about Ron DeSantis’ Harvard-Yale degree and Andrew Gillum being a thief there, trying to set up that dichotomy. And I cannot stress enough when he is doing it.

The newsman had a similar reaction when the president criticized mainstream media on Twitter. He might as well be prepared to tolerate Trump's remarks as there is still a lot of time before the president's tenure comes to an end.

John met his future wife when he was a University student. Their relation blossomed with every passing day and ultimately led to marriage. But he seems to be covert in case of his married life and seldom talks about his family in the public.

What has been known about the star-anchor is that he tied the knot with his college sweetheart, Kerry Voss. They were the members of the famous Hasty Pudding Theatricals while studying at Harvard University.

The couple started dating in 1993 and later decided to step up their relationship after deciding to get married.

Despite not opening about his wife in public platforms, he exhibits his love for his wife through social media.  In June 2014, he took to Facebook to wish her a very happy birthday and addressed her as the most wonderful person he had ever met.

John and Kerry are parents of twin children born in 2008. And John is a proud father of his kids, taking the social media at the earliest opportunities to show his son's achievements.

In February 2015, he posted a Facebook picture of his son's artwork and revealed his pride at his work. Not just that, he also stopped to admire his wife's customized cookies she baked for their kid's school event.