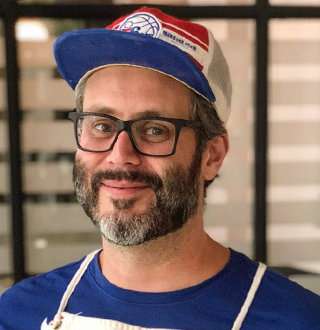 The Multifaceted talent, Eric Wareheim's attempt to woo a much younger woman than he ended in catastrophe. The events that transpired after further ruined his image.

The 42-year-old Pennsylvania native came into the public sphere as one half of the comedy duo Tim & Eric, alongside Tim Heidecker. The Adult Swim show titled Tom Goes to the Mayor - which he co-created with Tim - is one of his easily recognizable ventures.

Anti-Comedy:- A skit from Tom Goes to the Mayor which Eric helped co-create and which was picked up by Adult Swim (Published on 9 June 2014)

Eric's most recent acting plus directorial effort came in 2017 as he acted in seven episodes and directed a maiden episode of Netflix series Master of None.

Eric Wareheim Towers Over His Partner In Height

Eric was born on 7 April 1976 in Audubon, Pennsylvania. After receiving the high school degree from Methacton High School in Norristown, Pennsylvania, he enrolled at the Temple University.

It was during his stint at Temple University that he got introduced to his other half, Tim Heidecker. The comedic duo hit it off from the start despite the 6 inches difference in height. Eric, who stands at 6 foot 6 inches towers over his partner, Tim who has the height of 6 foot.

If anything, their difference in height provides the duo with much-needed dynamism in their performances.

What Is Eric Wareheim’s Net Worth?

Eric hasn’t limited his creativity just to the TV, having featured in numerous movies. He has also dabbled in music video directing. MGMT, Flying Lotus, Major Lazer, and Charli XCX are some of many musical acts who have collaborated with him.

Unbeknownst to many, he played as a backup guitarist for the band Adam and Justine in the 90’s.

For all his hard work and relentless pursuit of success, the 42-year-old has amassed quite a fortune. Various reports suggest that he has a net worth of more than $2.5 million.

The answer to the above-mentioned question is a resounding “NO!!!”

However, it has not stopped the 42-year-old comedian from declaring his work colleagues as his family on Instagram. On 18 July of 2018 - tapping into his comedic bag - he posted a snap of him lifting artist, Chloe Wise mid-air on Instagram with the caption that read:

We got divorced but now we married again.

Eric had apparently helped his “wife online,” Chloe develop a video series in the past and had remained good friends over the years.

His online persona resembles a family guy with wives and offsprings dispersed across the states. One instance of his online persona was on a full swing as he posted the picture of him holding each of the Kaplan twins around his arms. Eric’s partner, Tim, on the other hand, is happily married with wife and kids.

Not that Eric hasn’t been looking for the one to start a family, he just hasn’t been succesful at courting his possible wife -- whoever that may be.

The Tom Goes to the Mayor star had a brief fling with then 22-year-old MTV star, Lizz Lee in 2013. His romance with Lizz drew criticisms from the fans of both stars alike because of the 15 years age gulf between the two.

Ever since his break-up with Lizz, he seems content with enjoying singlehood.

Speaking to Rollingstone Magazine in 2017, he further delved into the enjoyment of single life and said:

I’ll admit I’m sort of addicted to that social media thing of ‘Look at me! I’m with hot babes on a yacht!’ I’ve eaten cod sperm. I’ve eaten a horse.

If you remain relevant enough in Hollywood, your singlehood will be met with gay rumors -- Eric is the living proof!