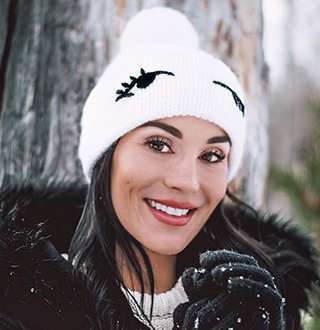 When dwelled deep inside self-described “adrenaline junkie”  Christina Cindrich's low-key personal life, we found out that there is more than what meets the eye. She has not been afraid to get dirty with words, using humor quite brilliantly! However, it was her dating life that sent fans through a hurricane of hope and despair.

The Pennsylvania native is an American television producer, host, travel expert, entrepreneur and actress. She was prominently the host of Private Islands and Global Passport. She is credited for writing, producing, and hosting AWE's Private Islands.

She currently does a segment called The Best Girlfriend Getaways on Forbes Magazine alongside Emmy winning producer/ travel expert Kerri Zane; they travel to different places, reviewing hotels, services, and contributing the information into knowledgeable articles on Forbes. Cindrich boasts a resume with over fifteen years in the Entertainment industry. She has worked with high profile people with the likes of Steven Spielberg in the classic movie Catch Me If You Can, starring Leonardo Di Caprio & Tom Hanks as its main lead. Other high-profile productions she has featured in include Spiderman-3; Frasier; CSI; and Desperate Housewives.

In addition to her artistic adventures, she has grown her business acumen in the personal care industry. Her exotic skincare/personal care brand, Christina Cindrich, from Rejuvenol laboratories has been gaining popularity over the years.

She was born on 26 August 1981 in Pittsburgh, Pennsylvania. She possesses Croatian ethnicity (descent).

How much Salary does Travel Expert Christina Cindrich Earn?

There are many perks to being one of the best travel/lifestyle producers in the world such as traveling and living a luxurious life. All of these perks are made possible by being paid a lucrative salary plus bonuses, which Christina enjoys.

Her career started at an early age. She spent her youth training in ballet, tap, jazz, singing, piano, acting and musical theater in her hometown of Pittsburgh, Pennsylvania. She represented the state of Pennsylvania in the Miss Teen USA pageant. Afterward, she moved to Los Angeles and began working in TV films and national commercials.

Yet after building a satisfactory presence in the industry, she sacrificed Hollywood to become a news anchor in Boone, North Carolina. She then started to produce, host and write her own content. This pivotal decision ultimately led her to a show called Private Islands on AWE TV. She created a legacy of her own as she took the show to a No. 1 rating with over 30 million viewers. She also won two Emmy Awards for hosting the show she produced.

Since then, she has produced shows for over 40 countries with the world’s best executives and CEOs, which has seen her as one of the most sought out travel and entertainment producers in the world.

According to Glassdoor, the national average wage for a television producer is $80,216 per annum in the USA. However, Christina isn’t an average television producer. She has kept her net worth relatively private but being one of the best in rising travel/lifestyle producers, she boasts a salary of more than a million dollars per annum, and in respect to that, if we also add the incomes from her skin care brand.

See Also: Erica Hill Is Parents With Husband At Age 41! Ethnicity, Salary And Other Facts

What Did Christina Cindrich Say About Boyfriend & Married Life in 2015?

In spite of all her accomplishments in her professional career, Christina had professed an uneventful dating life, at least in 2015.

For such a sexy and intelligent woman, nobody would have thought that she’d be single. Perhaps that is why nobody bothered to ask her about her dating life, which was very low-key. Maybe nobody wanted to get their hearts crushed.

However, there appeared one courageous person in 2014  who coyly asked her on Twitter whether she had a boyfriend or not. To which Christina gave a hilarious response saying,

"Ha! No boyfriend. I have yet to find a man with bigger balls than me."

A year later, another man also asked her on Twitter whether she was married. Fortunate for all her male fans, she wasn’t.

Two years later, in September 2017, Christina shared a picture of herself and a mystery man kissing her, breaking many hearts.

During the same year, around Christmas time, she shared another picture of the two together; this time they were wearing/sharing the same Christmas-themed sweater. This image finally broke the dedicated heart of the ones who were hoping that she wasn't dating the nameless guy. The togetherness that was vivid in the picture led many to believe that perhaps he was her husband. And they gave up on her.

But then some eagle-eyed fans came to rescue who noticed that she wasn't wearing any ring in any of the pictures with him.

Christina has made a niche career as a travel/lifestyle expert, and now with her sailing business owner boyfriend beside her - who seems a bit of adventure lover himself, she would not be worried combining business with pleasure.,

Is Christina Cindrich Getting Married In 2018?

Cindrich's adventures with the nameless man have been continuing in 2018 as well. She shared a picture of themselves enjoying at the beach at the Hotel Esencia in May 2018. The pair were celebrating the wedding of her friend.

Although the pair themselves haven’t got engaged yet, this seems to be the indication that they're slowing moving towards that direction. If Christina and her boyfriend, who remains nameless, go on at this rate, they could be getting married by next year. She is hoping that her wild adventure with him continues, and that’s a good sign for their shippers.