"It's On" Alexa Chung Romancing Boyfriend While Open To Lesbian Dating 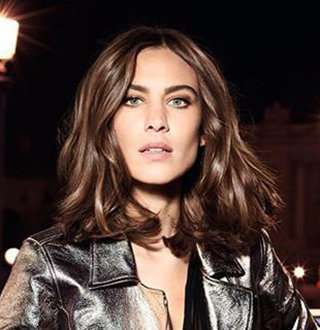 Alexa Chung's love life has been for all to see. After dating two high profile men, and one on-off relationship, there could be nothing about Alexa that remains hidden. However, that is not the case with the fashionable socialite's life as she dropped a major bombshell about her sexuality, leaving millions of her fans confused.

The British national is a multifaceted personality and has served as a writer, TV show host, editor and fashion designer. She wrote newspaper columns for The independent and Britain's edition of the Vogue, where she also served as an editor. Apart from writing, she is also one of the most fashionable names in Hollywood, regularly fronting up the magazines, Vogue, Harper's Bazaar and Elle.

In 2015, she hosted a documentary series for British Vogue.

The Future of Fashion: Watch Alexa Chung in the 2016 online documentary series for British Vogue on fashion (published 12 April 2016)

The dynamic model was born on 5 November 1983, in Privett, Hampshire England to Philip and Gillian Chung. Alexa initially attended Perrins School but did her A-Level from Peter Symonds College, Winchester.

After her high school, Alexa was accepted by the King's College London for her graduate program in English, but instead of attending the University, she turned towards modeling and signed up for a scouting agency at the tender age of 16.

The TV personality's beauty is of ethnicity; her father is of Chinese ethnicity, and her mother is Scottish.

After modeling for various teen magazines, she started creating up waves in the fashion industry. After her exploits as a teenager in modeling, she was signed up to model numerous big brands such as DKNY, Pepe jeans, Lacoste and also appeared in commercials for Fanta, Sony, and Sunsilk.

Moreover, her tall height and exquisite dressing sense made her a celebrated name in the fashion world. However, her exertions were not just limited to modeling as she began a parallel career in TV and hosted numerous shows in the UK from 2005 to 2009 before departing to the states. In the States, she presented It's On with Alexa Chung for the MTV for about a year before returning to the UK. She then hosted the NBC's golden glove's red carpet event.

A natural fashionist, Alexa is distinguished in the fashion world for her distinct but gorgeous dressing sense. Apart from frequent appearances in best-dressed lists, Alexa is also a regular model for renown brands like Vogue, Elle, Harper's Bazaar.

Furthermore, she released her own fashion line Alexachung in 2016 broadening her portfolio as a fashion designer.

Alexa Chung's Bio Has Multiple Layers: Written For Magazines As Well As Books

However, blessed with a sharp brain along with beauty genes, she also was juggling writing along with modeling and hosting career. She is a regular contributor to entertainment magazines The Independent, Company and as a contributing writer-editor for the British Vogue.

Her beauty has not only helped her become one of the most famous names in the industry but also earned loads of fans and admirers. The fans and admirers of the actress were left stunned after she revealed a previously undocumented side of her personal life in February 2018.

After dating handsome models and musicians at various point of time, Alexa revealed about having lesbian thoughts inside her. Speaking to the PORTER magazine before the launch of its spring edition, Alexa admitted sheepishly that despite dating handsome hunks, she wanted to date a female, and even added that she wanted her lesbian virginity broken.

The fashionista further added that despite wanting to date a woman she had not been attracted physically towards anyone, and it was just a fantasy. The star's statement added to fans confusion as she had been involved in several high profile relationships.

She was together with her musician boyfriend, Alex Turner, the vocalist of the British band Arctic Monkeys with the couple dating for four years from 2007 to 2011.

After splitting from Alex, she was said to be dating Swedish actor Alexander Skarsgård in 2015. The pair has been in an on-off relationship and parted ways in the summer of 2017. Despite their separation in 2017, the girlfriend-boyfriend duo was pictured together in March 2018, sparking rumors of a reconciliation. However, with question marks about her sexuality lingering in the air, nothing can be said just yet.

Alexa's desire for a lesbian relationship might be born not out of biological wiring or out of sheer adventurism, but it did shock fans.