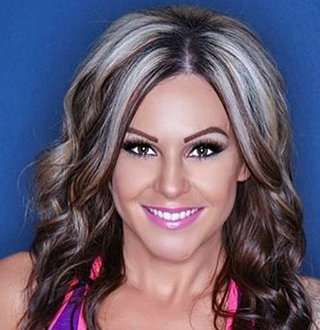 Former American wrestler Velvet Sky, during her heydays, was one of the best but decided to retire way too soon. But her life after retirement was not less fruitful, filled with a different set of possibilities and romantic happiness.

The Connecticut-native is one of most decorated female wrestler associated with TNA, a one time TNA Knockout Tag Team Champion and two times TNA Women's Champion. She is mostly known as the part of TNA's popular and successful Diva team, The Beautiful People.

Apart from her wrestling career, Velvet has also appeared in the music video of Montgomery Gentry's song, So-Called Life.

On 2 June 1981, Velvet Sky was born as Jamie Lynn Szantyr in New Britain Connecticut to a family of Polish heritage.

Athletic from her early age, as a high school student, Velvet participated in numerous sports like softball, cross-country, football, track, as well as cheerleading. Velvet started college but left it soon to pursue her career in wrestling.

Trained by the likes of Jason Knight and Kevin Landry, Velvet started her wrestling career with the ring name of Talia Doll, Talia Madison, and Miss Talia on the independent circuits.

After six years in the independent circuit, Velvet finally got her call from the TNA and boy did she make a name there. Soon after her debut gauntlet match, she changed her ring name to Velvet Sky and formed a team The Beautiful People and went on to win TNA Knockout Tag Team Championship, and TNA Women’s Knockout Championship twice.

In terms of her net worth, it is known that Velvet started her career with the salary of mere $275, but after all the years, by the time of her retirement, she was earning thousands of dollars per match. Which simply means her today's net worth sums up to a hefty amount, though the exact sum is not known.

After fifteen years as a wrestler, Velvet announced retirement from the game on 6 July 2017, citing that her body had had enough and she was now going to focus on college, something she didn't think important during her youth but came to realize its importance today.

As of 2018, Velvet is a personal trainer based on Connecticut and helps other people stay fit and shape their body. Although out of the physical action, Velvet has said that she will remain attached to the wrestling in some way, and keep meeting fans.

Despite all her achievements in TNA, she was never drafted by WWE. At one point Velvet had expressed her desire to go in WWE, and at that time it seemed likely, with many former TNA stars going into WWE and being successful.

After her retirement, however, Velvet totally changed her tone about her desire to join WWE, saying that she does not have the same love that she once had for the company. She added that she was more suited to TNA and the shows with more creative freedom than WWE.

It was the lack of compatibility, Velvet maintained, between them that WWE and TNA did not want each other.

Is Velvet Sky Married At Age 37? If Yes, Who Is Husband?

Coming to her personal life, Velvet is currently dating a fellow wrestler, Mark LoMonaco, or as is his ring name, Bubba Ray Dudley.

The couple has been together for years now--the prospect of a married life might be dawning between the couple. The bond that binds them is her boyfriend Bubba’s amazing culinary skills and both of their supporting nature--but mainly it is Bubba’s food that has won Velvet’s heart. WWE Meets TNA: Velvet and Bubba have been together for years but there has been no sign of starting a married life (Photo: Pinterest)

Jokes aside, Velvet and Bubba perfectly match each other and are so comfortable around each other that, like some old married couple, they don’t have any qualms about poking fun at each other in public, viz a viz their sleeping habits.

With their relationship cruising over time, Bubba might soon become Velvet's husband and they might start a family of their own.