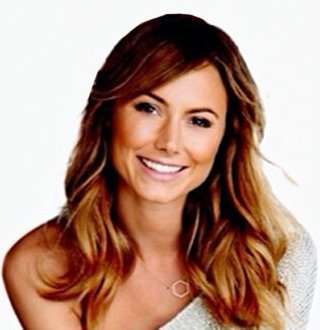 On 18 June 2018, the former WWE superstar welcomed her second child; a son with husband Jared Pobre, CEO of tech company Future Ads. However, the announcement of the baby came ten days after the pregnancy. Stacy Kiebler posted an adorable picture of her newborn son holding the hands of his parents on her Instagram and wrote:

The couple was swarmed with goodwill messages from friends and family after Stacy's announcement about the arrival of the newest addition to their family. Stacy Keibler announces the arrival of the newest member of the family on 27 June 2018 (Photo: Stacy Keibler's Instagram)

Stacy had been hinting about the pregnancy a week before she gave birth to her son. After disappearing from social media for three years, she made her comeback on Instagram after posting a sweet picture of her family and announced that the family would be soon expanding to four on 13 June 2018.

And merely two days later, she posted a video of her daughter playing with her baby bump and wrote about Ava's excitement at becoming a big sister. And on 17 June, just a day before she gave birth to her son, she posted a picture of her adorable family and thanked her husband, Jared Pobre for being the best father for their kids and for loving her.

The former WWE diva also has a daughter Ava, 4, with her husband, born just months after they tied the knots in March 2014. And about five months on from the wedding, the couple welcomed their first child Ava. The marriage and kid came not just as a surprise to many of her fans; it was a hard fact to digest even for Stacy herself.

Speaking to US magazine three months after the birth of Ava, she explained that she had never thought about getting married and setting down until she met Jared Pobre. And once they elevated their longtime friendship to love, Stacy knew that Jared was the one, the right love she was waiting for.

And whats more, the judgment has proved to be true.