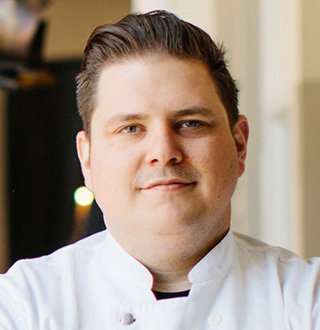 Chef as a profession Joe Flamm achieved big heights in his career after appearing on the show Top Chef. Along with winning the title of Top Chef, he’s also achieved something bigger in his life which is the title of a "Dad," all in 2018.

Joe Flamm is an executive chef of Michelin-starred restaurant Spiaggia & Café Spiaggia in Chicago who came into media popularity for bagging the prestigious title of Top Chef in season 15 of the show. Adding more to his achievements, he has had the opportunity to cook for presidents and several celebrities.

Born on 6 April 1986, the Chicago native grew up in the house of a busy sergeant mother working for the Chicago Police Department. This led Flamm and his three siblings to prepare food for themselves since a young age. His love for cooking developed as he made homemade pasta with his Grandma Mary.

The young home cook soon decided to turn his passion into a professional as he attended Le Cordon Bleu College of Culinary Arts in Chicago to sharpen his culinary skills. He later polished his culinary skills in finest kitchens including Art Smith's Table 52, Bill Kim's Belly Q, and Stephanie Izard's Girl and the Goat.

Then he moved onto Spiaggia & Café Spiaggia where chef Tony Mantuano mentored him. Mantuano even took him to Italy in order to get in touch with Flamm’s Italian side and persuaded him to join Top Chef!

After getting the boost of motivation and push from Tony, he embarked on his journey to Top Chef and even won the title.

He competed against another talented chef and co-contestant Adrienne Cheatham, who both beat 14 contestants to reach the finale of Top Chef.

In the finale of Top Chef, Flamm served a four-course meal showcasing his Italian Roots on the table with famous chefs and restauranters while his opponent displayed her Southern roots.

Despite the heated moment and extreme competition, the chefs were very friendly to each other. Joe even stated about their goody chemistry stating in an interview with Forbes:

In the finale we didn’t feel like we were going against each other; it wasn’t about me versus her, it was really us against ourselves.

That’s what we call a healthy competition!

Joe Flamm's Addition To  Net Worth After Winning Top Chef

For Flamm, this win was an absolute bag of surprise as he never planned on joining Top Chef on the firsthand.  Already eliminated in the early stages of the show, he made a comeback through the wild-card entry!

The come back turned out to be fruitful as he won the title of the Top Chef and also received a cash prize of $125,000 for the win which definitely elevated his net worth (undisclosed).

Moving onto his love life, he has been cooking finesse love with his wife Hillary Delich, who is a senior consulting manager at Vodori.

He has been happily married to his wife since 23 May 2015, His wife shared a beautiful picture of their wedding on the occassion of their third anniversary.

And to add more sweetness in their spiced up romantic life, on 4 December 2018, they welcomed a baby boy named Luka William. The proud dad also shared his joy stating that it was the best day! Well, it won't be wrong to say that Joe is a lucky man. With a successful professional and personal life, Joe got blessed with a cute little baby which gave him a new title -- Daddy.