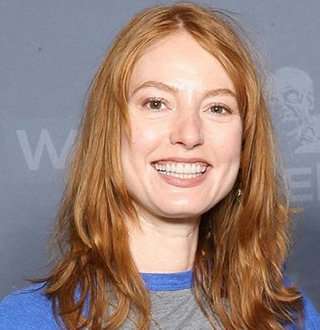 Alicia Roanne Witt is an American actress, director, and pianist. She first came to fame as a child actress after being discovered by David Lynch, who cast her as Alia Atreides in his film Dune and a guest role in his television series Twin Peaks.  In 1998, she starred in Columbia Tristar’s hit horror movie, 'Urban Legend.'

She was also on 5th Season of Emmy-award winning FX series ‘Justified' with Timothy Olyphant. She also appeared on Season 4 of ABC’s hit drama series Nashville as country star Autumn Chase. She has further worked in the Emmy-award winning Showtime series ‘House of Lies’ opposite Don Cheadle; DirecTV series ‘The Kingdom,’ the hit CBS show ‘Elementary,’ and TNT series ‘The Librarians.’

You May Know: Tisha Campbell Facts: From Parents And Siblings To Shocking Net Worth

Alicia Witt was born on 21 August 1975, at Worcester, Massachusetts, the USA to teacher parents, Diane and Robert Witt, and raised alongside her brother Ian.

She was homeschooled and later at the age of 14, she earned her high school equivalency credential. Later on, she studied piano at Boston University and competed in national events.

The 43-years-old actress with a height of 5 feet and 8 inches is an accomplished musician who played piano at the Regent Beverly Wilshire Hotel. Later, had also released a self-titled album in 2009.

Besides that, she is also a talented director making her debut with the short film 'Belinda’s Swan Song' which premiered at the 2006 Rhode Island International Film Festival. So, after calculating all of the works she has been involved in throughout her career, she has a net worth of $4 million.

Is Alicia Witt Still Married To Her Husband Or Dating Someone New?

Although Alicia was romantically linked with many people, the rumors were practically not true. After being frustrated with all the names that were linked up with her by the online platforms, back in 2013, she mentioned on her Facebook that among all the names that were joined with her, she was only with two men in her life; Nathan Foulger and Ben Folds. Hand-in-Hand With Boyfriend: Actress Alicia attends the About Time premiere in New York along with her boyfriend, Ben Folds. (Picture: dailymail.co)

Talking about her relationship with Nathan, back in 2001, Alicia was married to Nathan Foulger. But shortly after five years of calling him her husband, they got separated in 2006. Later on, after six years, another man entered her life, and it was none other than the songwriter Ben Folds.

Interesting: Tempestt Bledsoe On Getting Married And Having Husband; Redefine Relationship - Then And Now

In the year 2012, Alicia started dating musician Ben Folds, a year after he split from his fourth wife. However, the relationship with 47-year-old singer-songwriter boyfriend also didn’t last for many years. And the couple later broke up in 2014.

And as of now, whether Alicia is seeing someone new or is single is still a mystery yet to be known.