Scott Hanson Salary | Ginormous Net Worth, Just Like His Counterpart? 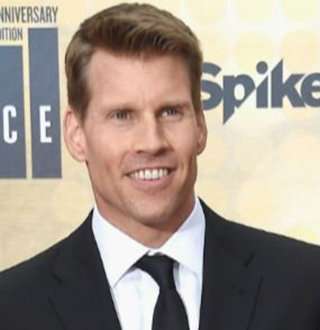 American correspondent Scott Hanson covered NFL shows throughout his career, but his sabbatical to personal life discovery almost had him professional suicide.

Scott Hanson had a slow start to his career before gaining popularity as the host of NFL Network’s show, NFL RedZone which kicked of in Fall of 2009. He serves as a host for NFL Network’s on-location coverage of various events like NFL Scouting Combine, Free Agency, NFL Draft, Super Bowl, and many more.

Born on 24 June 1971 and raised in the city of Rochester, Michigan, Scott Hanson holds the American nationality. He belongs to white ethnicity.

As for his academics, Scott attended the Bishop Foley Catholic High School in Madison and graduated from Syracuse University.

Reticent Scott who stands at the height of 6 feet 1 inch, relishes a happy love life.

Who Is Scott Hanson's Wife?

When it comes to Scott Hanson's romantic affairs, the lines are pretty blurry. In fact, the only little bit that we know about when it makes it to the topic of the correspondent's love life a tw eet from 2011 that suggested that he wasn't married at that time. No Romance Here: Scott Hanson mentions how he wants his wife to speak about him if he gets married someday on Twitter (Scott Hanson's Twitter | 8 October 2011)

While he did hint on his unmarried life in that tweet, he also gave an idea on how he wanted his future wife to speak about him.

But, other than that, there's nothing he has talked about to date that could possibly spur rumors about his possible wife. That probably makes it safe to say that he is not involved in any fling right now.

En Route To Scott Hanson's Career: His Journey To NFL

Destined to become one of a prolific sports reporter, Scott landed his first job in 1993 as a reporter and anchor for NBC affiliate WPBN-TV in Traverse City, Michigan and stuck with NBC to be a sports reporter for WICS-TV till 1994.

After he moved to Springfield, Illinois, he had to change his work-place and then went to WFTS-TV, an ABC affiliate in Tampa, Florida, where he reported about the Tampa Bay Buccaneers rise under coach Tony Dungy.

After a successful spell in ABC, In 2002, he joined Comcast SportsNet Mid-Atlantic in Bethesda, Maryland, where he was a main anchor and reporter.

In between working on CSN, Scott took a sabbatical of personal discovery which eventually led to a drastic change in his life.

The reporter, who once proclaimed to be a broadcasting machine and fully focused to his work, ended up living with missionaries of charity in a downtown Los Angeles home, helping homeless and completely left the profession he had.

He seemed very frustrated to the life he'd lived as a reporter as he found more peace while he worked for the homeless. But that couldn't last long either.

After a lot of soul-searching and prayer from his sabbatical side of life, Scott eventually got back to more reality as he decided to make a comeback to the world of sports broadcasting.

Soon, he started freelancing on the NFL network and finally joined the NFL Network, where he served as a reporter, anchor, and host in 2006. Scott seemed to have moved on from everything as he was very excited about joining the network and getting back to life.

You Do Not Want To Miss: Who Is DWTS Young Age Star Milo Manheim Girlfriend?

As of now, Hanson has become an important figure of NFL network and also hosts NFL Network’s show, NFL RedZone which debuted in Fall of 2009, and he enjoys spending at NFL too.

With all the fame in his career side by side, the NFL Network host and sportscaster Hanson also garners handsome salary as an incentive and also as a sportscaster. And his fantasy career also supports his net worth to some extent.

As of all, his net worth estimates at around $3 million.