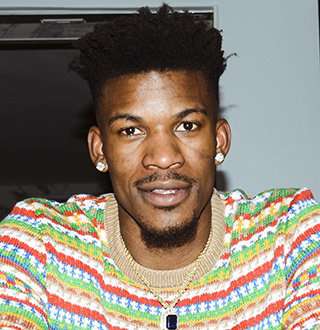 The Texas-native is an American basketball player. He officially began his basketball career as a rookie, after being drafted with the 30th overall pick by Chicago Bulls back on 9 December 2011. Hard for him, as he was selected the same year as another prolific player Derrick Rose in the same team

Being on his shadow, he had a tough start to his career. But like an army on a mission, he never stirred back and worked hard, as of which he earned a long scale contract at Chicago Bulls for four years until 2015. He even became the Most Improved NBA player and made his first career All-Star nod on his period at Chicago Bulls.

What's more, he is now the foundation of a top young NBA team, Philadelphia 76ers alongside Ben Simmons and Joel Embiid.

Father & Mother Responsible For Jimmy's Rough Childhood; But Worked His Way Out To The Top

Despite achieving success growing older, Jimmy, who was born on 14 September 1989 in Houston, Texas, had to share a reasonably rough childhood; he never had a family.

After Jimmy's father deserted him, his last hope was his mother. But sadly after his only hope, his mother also asked him to leave the house saying I don't like the look of you. You gotta go, his childhood became a very tough period for him as he had to find himself a shelter to live-in.

However, it never meant the end of the world for him as he grew up in Texas with his friends; he even managed to complete his schooling from Tomball High School.

Not only did he gained his primary education there but also first touched the basketball. Furthermore, enhancing his basketball skills, Jimmy, who was once a homeless kid, then got himself into people's notice in no time.

But after such happening in his childhood, he had set a goal of prospering his academics more than flourishing his basketball career. As of which, he diverted his basketball plans and joined Tyler Junior College and then shifted to Marquette University.

Although he had his plans, such a talent like Jimmy was never meant to be wasted and it never really happened either.

As shortly after joining the University, Jimmy's raw talent was soon noticed by his brother Jordan Leslie, a freshman football and basketball player, who, not just provided him with a shelter to live in but also set him on his way to becoming one of the greatest NBA players of his time.

As of which Jimmy has managed to stand tall on both sides; physically tall at the height 6 feet and 8 inches and professionally tall with a top NBA career.

As humble as he can be, he doesn't hold any outrage against his mother and still shares a healthy relationship with her.

At Age 29, Is Jimmy Buttler Dating With Girlfriend Or Is He Living With Wife?

Just like shooting clutch threes in the dying moments and winning the game for his team, Jimmy has always been winning when it comes to shutting down rumors with celebrity stars being his girlfriend.

The professional basketball player was first rumored to be dating Shay Mitchell in 2016. A confident shooter like Jimmy shot fire on the rumors calling Shay calling her his celebrity crush. But nothing really happened after all.

And later in August 2018, Jimmy once again got into the limelight after he was spotted with a famous singer, Iggy Azalea.

As of which, fans started thinking of "Jiggy Butzalea shirts," but it only remained in thinking as he managed to deny every dating rumor with her which was furthermore supplemented by Iggy's clarifications. Sneak-In: Jimmy Butler with Iggy Azalea stand next to each other in a restaurant parking lot in August. (Photo: TMZ)

As of now, Jimmy, age 29, is on top of his career with Philadelphia 76ers and has no intention to have a girlfriend or wife for himself.

Fair enough to say, he has made basketball his girlfriend and the court his home.