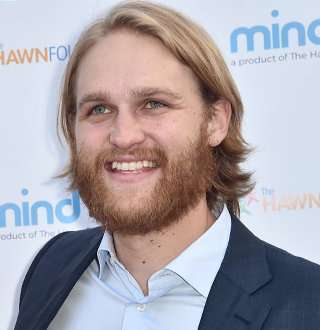 American actor Wyatt Russell having gone through an unexpectedly failed married life didn't lose faith and showered the fans with the introduction of his new girlfriend.

The Los Angeles native's fame is most prominent for his role as Zook in 22 Jump Street. He features in upcoming Jim Gavin's TV series, Lodge 49 as Dud.

Spreading His Name: Wyatt Russell joins Kathie Lee Gifford and Hoda Kotb as he talks about his new AMC show, “Lodge 49” on TODAY (Published on 7 August 2018)

Wyatt also has his hands in the TV series like The Walking Dead, Black Mirror, Arrested Development, and Law & Order: LA. With numerous credits in his side, he has garnered quite colossal stardom and fame.

Part of his fame also credits his family members, as Wyatt, who was born on 10 July 1986, belongs to the family of stars. His parents, Kurt Russell and Goldie Hawn, both are renowned stars of the entertainment world. Moreover, his half-siblings, Kate Hudson and Oliver Hudson are also actors.

31-year-old Wyatt was a professional ice hockey player before he dived into the entertainment realm. He played as a goaltender for various teams such as Richmond Sockeyes, Langley Hornet, Coquitlam Express and so on.

But his career as a hockey player cut short when he suffered injuries. Afterward, he moved on with acting.

He debuted in the industry with the role of Orphan Boy in Escape from L.A. back in 1996. However, his role remains uncredited. Then after, he started appearing in movies and even TV series.

Wyatt garnered quite a fame from the movies, Cowboys & Aliens, 22 Jump Street and Everybody Want Some!! He even featured in 2016's film titled Folk Hero & Funny Guy, which premiered at the Tribeca Film Festival.

With support from the family and also his determination, Wyatt's career has prospered. He has even earned a good fortune, but the exact figure of his net worth remains confined to date.

As an actor who's still active as ever when it comes to killing his given role in any movie, Wyatt Russell is taking another huge step playing as one of the lead characters in the 2018 thriller-mystery movie, Overlord.

The movie is directed by Julius Avery was produced by J.J. Abrams, following the plot of American soldiers who get stuck behind enemy lines after D-Day and unknowingly discover some secret Nazi experiments.

Wyatt Russell is portraying Sergent Ford alongside Jovan Adepo who is playing the role of Pvt. Boyce. Following Overlord's bow, Deadpool creator Rob Liefeld tweeted on the movie opening with an incredible aerial sequence and sustaining a ferocious war and monster movie.

The severely-waited movie is scheduled to be released on 9 November 2018 by Paramount Pictures in the United States. Fans are anticipating the return of Wyatt Russel in the unique horror genre movie.

Taking Some Glimpses At Wyatt's Past: Married Life With Ex-Wife

As of his love life, Wyatt was once married to stylist Sanne Hamers. The husband and wife duo had first met in the Netherlands when Wyatt was playing hockey in 2010. The two connected with each other at their first meeting and started dating.

After dating for four years, the pair got married on 14 March 2014. However, their marriage ended after the two found the irreconcilable differences between them. They separated after one year of their marriage in March 2015 and officially divorced amicably after three years in December 2017.

After the separation from his first wife Sanne, Wyatt moved on with his new relationship.

Like father like son is a line that fits well in the life of Wyatt. Just like his famous father Kurt Russell, who had found love in his mother Goldie Hawn after the pair had filmed together in Swing Shift back in 1983, he also found love on the sets.

Wyatt appears to follow his parents' footsteps as he also started dating his actress girlfriend, Meredith Hagner after they filmed together. The pair had met while they shot the film Folk Hero & Funny Guy in 2016. They connected with each other personally during their together times and initiated their relationship. Since then the pair has been dating blissfully. They attend various events together and spend quality time during vacations. The pair were even together at the Maui Film Festival that took place in Maui back in June 2016.

And the romance does not stop there. Wyatt and Meredith as of now are officially an engaged couple. Yes, you read that right! On December of last year, Wyatt got down on one knee and popped the question to his girlfriend. And to no surprise, Meredith took no time in saying 'Yes'. The news of their engagement was shared by Meredith on her Instagram page where she posted a picture of her along with her now fiance along with a caption that read :

" The love of my dang life proposed to me."

It is only a matter of time before the wedding bells finally toll and the two love birds begin their new stage of life as husband and wife. Interestingly, the lovebirds also bought a $1.725 million worth 1930s Spanish-style home of Steve Mauldin in Sherman Oaks, CA in April 2018. Seems they are taking things one step at a time.