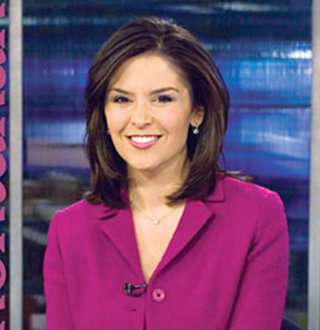 CBS correspondent Meg Oliver had the blessing when it came to her career, but she embraced a greater blessing of a family which means the whole life to her.

Meg Oliver is a known award-winning Network Television Correspondent and Anchor who reports for CBS This Morning who's also known as the correspondent of CBS Newspath.

Height Of Technology: Meg Oliver reports on the happenings to personal account information online after a user’s death and the steps to take to protect digital afterlife (Published on 13 February 2017)

Meg Oliver spent days delving into the state of Utah while reporting on the plight of thousands of wild horses that were facing slaughter.

Born on 7 December 1970, Meg Oliver was raised in Birmingham, Michigan. Meg graduated from the University of Montana in 1993 earning a Bachelor of Arts degree in Journalism.

You May Also Like: CBS’ Juliana Goldman Married With Husband! Plus Family, Baby To Salary and Net worth

The 47-year-old news anchor started her reporting career in 1993 working for KCFW-TV till 1995. After that, she began working for Northwest Cable News in Seattle, Washington and eventually worked as a reporter at WTIC-TV in 1997.

She served as anchor and reporter for WKBD-TV and WWJ-TV from 1998 to 2001 and moved to serve as weekday anchor at KGPE-TV.

Standing at the impressive height, Meg worked as a freelance reporter for CBS Newspath in Washington, DC, starting in May 2005 and she was named anchor of Up to the Minute of CBS News.

The anchor reported for Good Morning America Weekend Edition and ABC World News alongside David Muir as she filled in anchoring on World News Now. As of now, Meg is back reporting as a correspondent for CBS Newspath.

Meg Oliver’s Net Worth From CBS

As a reporter, who has juggled around several posts and networks, Meg undoubtedly has earned more than a considerable amount of money.

From her contribution to CBS and ABC news, she amassed her present fortune as well.

Looking at the pays of the positions Meg has taken till date and her current CBSN reporting work, it’s safe to say that her net worth can be blindly calculated in millions.

As much as people might think that reporters don’t successfully maintain time for their family, Meg dives in and proves the topic wrong. She leads a more than happy life with her husband and three children.

The CBSN correspondent has been to married to her husband for nearly 16 years, and she can’t help but still gush about the love of her life, her daughter and two sons on Instagram. Brightest Smiles In Family: Meg posts a picture with her husband and children on Instagram on 22 June 2018 (Photo: Meg Oliver’s Instagram)

You Don't Want To Miss: What Is Mckinzie Roth's Age? Married Life With Husband To Measurements

Meg enjoys a fair amount of time with her family as they go on vacations and she doesn’t hold back a tiny bit when it comes to sharing those moments on her social media sites.

She keeps her followers updated on every random moment and every small event that cross her daily life with her adorable family, and from the looks of it, Meg is living her life to the fullest with beautiful blessings showering upon her.