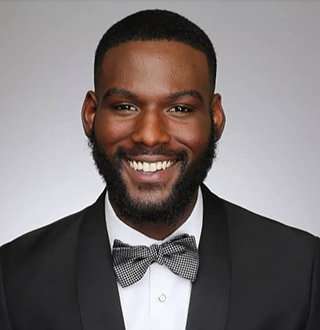 American actor and model Kofi Siriboe never felt bashful on praising Black women. He often speaks about his love and devotion towards them. He is a fortunate guy and likewise found his love matching those qualities.

The California born artist is best known for portraying the lead role of Ralph Angel Bordel in the Television drama series Queen Sugar. He co-starred in the 2017 romantic comedy film Girls Trip. Kofi is also a model associated with Wilhelmina Models and Vision. From The Film: Kofi along with co-stars Dawn-Lyen Gardner (right) and Rutina Wesley in the third series of Queen Sugar (Photo: Deadline.com)

Kofi Siriboe made his television debut in 2003  fantasy drama series Strange & Charmed. He rose to popularity for his supporting role of Javy Hall in the 2008 comedy-drama, The Longshots. He appeared in a recurring role as Tyler Miller in the MTV  teen comedy series, Awkward from 2014 to 2015.

You Don't Want To Miss: Gethin Jones Age 40 Nearly Got Married; What Went Wrong With Partner?

The multitalented actor was born on 2nd March 1994 to Ghanaian parents; a father, Kwame Boakye, and mother, Koshie Mills. Koshie serves as a manager for him. He is accompanied by two brothers named Kwesi and Kwame Siriboe, and both of them are actors.

Kofi is fortunate to have family who supported him throughout his career. Talking to Essence.com in November 2016, he stated that his family is the critical factors for his successful career. He added that they supported and backed him even though he was a little apprehensive.

Talking about his personal affairs, Kofi was linked with an American actress and writer Issa Rae in 2017. He used to get flirty with Issa by reacting and commenting on her post on social sites. However, the alleged dating affairs entirely stopped as Kofi confirmed his new relationship in March 2018.

A Suicide Inspired Kofi Siriboe For His JUMP!

The hunky Queen Sugar star proved to the world that he has more than to offer to the industry through his latest work, a short film, JUMP. He wrote, directed, produced, and starred in the film which released in October 2018.

JUMP is an inspirational film portraying Kofi in the role of Ziggy-who is battling with an intense mental health issue as a consequence of grappling grief. It shows the tormenting struggles one undergoes as a victim of depression.

The captivating truth behind the filmmaking is the cause behind it. Kofi set off to make this film as a way to let his frustration out for losing a friend/mentor to suicide.

It happened around the time while he was on a break from Queen Sugar and left him in utter grief. He found this movie as a medium to create a relatable subject and help the victims to grow resilient in the meanwhile.

Kofi confirmed his dating relationship with the East African supermodel, Duckie Thot through an Instagram post on 8 March 2018 which has been deleted now. He uploaded a series of pictures with a poem dedicated to her on the occasion of the International Women's day.

Similarly, Duckie also uploaded a picture of Kofi on her Instagram after two days of his confirmation. The photo was taken in front of Eifel Tower, France and she wrote a caption mentioning him that he is forever at her happiest by his side. Before the relationship, Kofi had opened up about his deliberate affection toward Black women at the 10th annual ESSENCE Black Women In Hollywood event in 2017.

He insisted that it is a response to the treatment they receive from society. Further, he added that he loves Black women, who are giving each other credit without relying on the man or the system.

It seems he has finally found his preferred partner whom he would make a wife in the coming years.

Kofi And Duckie Call It Quits!

Yes, you read that correctly. Kofi and Duckie have called it quits in their relationships. Everyone's favorite chocolate couple have ended their relationship and from the looks of it, not in good terms. After a year of happy and secluded relation with one another. The pair have now gone their separate ways putting aside all the romantic poems and messages.

As for the reason for their breakup, Duckie revealed that Kofi was having an affair with multiple women while still being in a relationship with her. News that left audiences in shock. What seemed like a perfectly matched relationship was not as it seemed. The alleged affair left Duckie in a state of grief and anger. As for Kofi, it seems he has put aside his past and has moved on to establish his career.