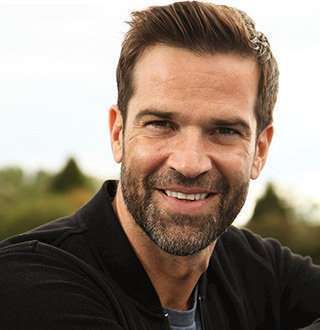 Gethin Jones should have been a married man already. But looks like his so-called high standards will keep him from finding the pristine partner for good.

The British hunk is known for his work on screenplay Hunky Dory and The Children's Party at the Palace. He also hosted BBC’s Blue Peter during 2005, and currently, he is hosting his own radio breakfast show from 6 am to 10 am on the Bauer Network’s brand-new station, Hits Radio.

Hunt For The Partner: To celebrate Cinderella the Pantomime coming to Manchester's Opera House in the festive season, Hits Radio's very own Prince Charming Gethin Jones goes on the hunt to find his one true love (Published on 28 September 2018)

The host owns a versatile personality from TV presenting to strumming violin and pressing down the piano. He is praised for putting his handful talents to good use in the entertainment world.

Why Gethin Jones Got Emotional While Unveiling Family History?

The former Blue Peter host was born as Gethin Clifford Jones on 12 February 1987 in Cardiff, Wales. He shares parents Goronwy Jones and Sylwia Jones with an elder sister Mererid.

The Wales native got emotional when he found about his family history during BBC One Wales series during 2013.

The emotion flowed for an incident in the past when his ancestors escaped death; great-grandfather in mining disaster and grandfather in Poland prosecution.

It was ordinary for him to get sensitive after all the ages spent in oblivious to the cause behind his family’s existence.

Despite his towering height of 6 ft. 1 inch, he is a sentimental man at age 40. Another compliment for his age would be a tag of an unmarried man.

There was not a single "not-so-shocked" face when the charming TV personality’s split revelation with pop singer Katherine Jenkins came out in 2011.

Everyone expected them to go a long way after they got engaged in 2007, but their destiny had something else in the store. Not My Wife: Gethin Jones and Katherine Jenkins pictured before they split in 2011 (Photo: dailymail.co.uk)

The formerly engaged duo left everyone curious after calling quits in the engagement for the unrevealed reasons.

However, Gethin’s sister disclosed an awkward theory behind the failed relationship while speaking at his Hits Radio Show in June 2018. The theory being Katherine’s unusually shaped toe. Oh, come on! He can’t be that picky.

While the breakup cause has been popping up even years later, the suspected wife-to-be had moved on already and married American artist Andrew Levitas in 2014.

She even shares two children in her married life. And for Gethin’s part, he is left to look for a life partner in girlfriends.

Gethin Jones Will Start Family With Right Partner Only

Gethin’s wife candidate shall meet his standards-whatever that be, or else she would not make any far than a girlfriend status just like his former girlfriend, Katja Zwara, a German Model.

He dated the model for almost a year before parting ways in 2018 on account of their busy work schedule.

You May Also Like: NFL Reporter Suzy Kolber Husband Is A No Show, A Gay/Lesbian As Single Mother? She Was My Girlfriend: Gethin Jenkins And former Girlfriend Katja Zwara during Halloween (Photo: Dailymail)

So far so clear that the TV host is unmarried not because he is gay or anything as such but because he hasn’t found the perfect partner.