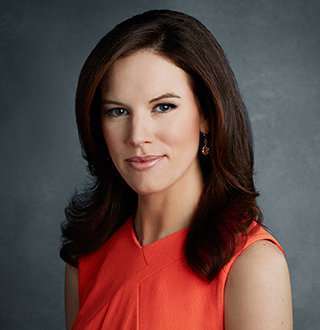 Expect the unexpected is the perfect line when it comes to Journalist Kelly Evans. Kelly took the whole media by storm after her colleagues announced that she was married out of nowhere and not just that, she had a new surprise for everyone.

American Journalist Kelly Evans is the co-anchor of the show Closing Bell on CNBC News Channel. The Hartford native, based on CNBC's headquarter in new jersey, joined the show in February 2012 as an on-air correspondent, reporting across CNBC's Business Day program.

Prior to joining CNBC, she was an economics reporter at the Wall Street, a journal where she wrote The Ahead Of The Tapes column. Along with that, she was also the co-anchor Squawk on the Street and Worldwide Exchange.

You May Also Like: Landon Dowdy Wiki: Age, Wedding, Husband & Grinning From Ear-To-Ear

Kelly started her career from wall street journal in 2007 where she covered real estate and economic sectors. She has also played the role of moderators in different debates such as 2012 Republican primary debate in Myrtle Beach, South California and James Carville vs. Ann Coulter debate in the 25th annual mock convention.

Compared by many to the former CNBC host Erin Burnett, who is married to David Rubulotta, she has also appeared as a regular guest on various television programs.

Born on July 17, 1985, to father Dave Evans in the city of Hartford, she attended the Rockbridge Country high school. She was a George Washington Honor Scholar and competed for four years of her full-ride academic scholarship.

She graduated from Magna kum laude in Washington and Lee University. She became a four-time scholar athlete and was also a co-captain for lacrosse team for women.

Can't Find Kelly Evans' On Social Media? Here Is Why!

Many of her fans or foes may google her, but they won't find her Instagram. They might bump into her long closed Twitter and Facebook only to find the empty feeds as she decided to quit social media back in 2016. Farewell Fellas: Kelly Evans announced via her Twitter that she was quitting social media in July 2016. (Photo: Kelly Evans' Twitter)

The fact that the charming TV personality is not on social media disappoints many of her fans. But it's her take on keeping her life to herself.

Kelly has never been a big bragger about her personal life anyway, so it's should not be a bombshell that she is not on social media. But CNBC fills in to update on her personal life at occasions; most significant occasions like her marriage announcement and the good news of her childbirth. That is the only way people get to know what's going on in her life. And, thankfully there is this way for the least!

Kelly Evans' News About Getting Married Announced On-air By CNBC

Not only does she enjoy a serene career, but she also enjoys a blissful married life with husband, CNBC's sports reporter Eric Chemi.

Although she tried to keep her wedding a secret from audiences, her CNBC colleagues spilled the news about her marriage. Her then co-anchor Bill Griffiths at the show Closing Bell announced on 20 April 2017 that she was getting married on coming Saturday, i.e., 22 April.

Not just that, on a video posted by CNBC, Bill Grieffth congratulated her saying:

“You guys are match made in heaven..let me just tell you..as you know my wife and I are celebrating our 35th Anniversary this Monday I can only hope that you have as much as happiness as Cindy and I have. On behalf of the whole gang who love you as you know...your colleagues at CNBC and most especially, the gang on Closing Bell

He also wished her and her husband-to-be all the happiness in the world after getting married.

Journalist Kelly Evans presented flowers by her colleague congratulating for her marriage during an interview on 20 April 2017 (Video: cnbc.com)

Bill also presented her with a lovely bouquet on behalf of whole the Closing Bell team. Despite having announced about the news of her upcoming wedding live, she has not provided any news on whether the couple had been engaged before their big day.

The good news kept coming from CNBC as they announced that Kelly and her husband had welcomed their firstborn, a son on 5 July 2018.

CNBC took no time to welcome the newest member of Kelly's family and posted a sweet video with the picture of a healthy looking boy. They also stated in the same video that the baby, mommy, and daddy were all doing well and elated at the arrival of the little boy.

A new member in the family: CNBC channel congratulates Kelly Evans as well as the whole family for the birth of their first baby boy on 5 July 2018. (Photo: cnbc.com)

As of present, the couple is rejoicing the birth of their first child and are living their best life.