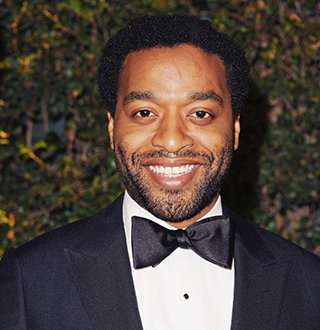 If break-ups are met with despair, then love should always be greeted with hope. For Actor Chiwetel Ejiofor both the conditions were true as he had been despairing from his heartbreak before he met someone special!

The Nigerian Actor is best known for his leading role in the 2013 film 12 Years a Slave, which earned him an Academy Award nomination for Best Actor. Apart from that, he has also played prominent roles in the movies including The Martian, Doctor Strange, Children of Men, Love, Amistad, and 2012.

He was also announced to play the role of Scar in the movie, The Lion King, which will release in 2019.

Born on 10 July 1977, in London's Forest Gate, Ejiofor was born to middle-class Nigerian parents. His father, Arinze, was a doctor, whereas his mother, Obiajulu, was a pharmacist. He also has a younger sister named Asher Zain.

Ejiofor started acting at an early age. He got his first taste of acting when he played the gravedigger in William Shakespeare's Hamlet at his junior school, Dulwich Prep London.

Pursuing his passion, he joined the National Youth Theatre. He got into the London Academy of Music and Dramatic Art. After being cast in Steven Spielberg's film Amistad, he left after his first year.

In September 1995, he played the title role in Othello at the Bloomsbury Theatre; he also performed the Theatre Royal, Glasgow in 1996.

Ejiofor’s Father Died in Front of Him

During a family trip to Nigeria for a wedding in 1988, he and his father were driving to Lagos after the celebrations. Unfortunately, their car was involved in a head-on crash with a lorry, which killed his father.

Ejiofor, only 11 age at that time, was severely injured and was left with deep scars that remain on his forehead, and memories of his father in his brains.

Ejiofor’s sister, Asher Zain, is a CNN anchor, based in New York City, who reports CNN Newsroom on Friday and Saturday. She’s married to Steve People.

During 2014, his sister had an emotional display of tears when she was surprised with the opportunity to report that Ejiofor had been nominated for an Oscar for his performance in the overwhelming movie, 12 years a slave.

Chiwetel Ejiofor: ‘I think it’s probably harder to be gay.’

The year 2016 was the second year running that the Academy came under fire for failing to nominate a single black actor. Ejiofor, who was nominated for an Oscar in 2014, had his say on the matter, stating that it was harder to be gay than black. He said,

“I think sexuality is still marginalized in a way that is pretty open. I think it’s tough.

I think for one’s own piece of mind, for one’s own sense of self and psychological health, I feel like that’s the horrible thing about “don’t ask, don’t tell” and all that fucked-up shit, because it produces a sense of shame, and therefore this sense of being “less than,” you know?

Ejiofor is a firm LGBT supporter. However, he wasn’t the only one speaking amidst the whole controversy. Other famous names included Sir Ian McKellen, Tavis Smiley, and more had their say on sexual marginalization and need of works for gay upliftments.

The Oscar-nominated actor has undoubtedly tried on many occasions to find love. Being a successful man, it’s natural that he has been linked with countless names. His one big fling into a relationship was with an actress. He was been in a long-term relationship with English actress Naomie Harris from 2000 to 2007, with rumors of the dotting couple turning into husband and wife rife in the industry.

That was not to be the case and the Nigerian actor and his girlfriend split amicably at the end of 2007.

A few years later in 2013, he started to date a Canadian actress, Sari Mercer. This time, unfortunately, their relationship lasted for a few years as they broke up with neither citing the reason for their split.

Despite an active dating life, he hasn’t been married and doesn't have any children.

Who is Chiwetel Ejiofor’s New Girlfriend?

Chiwetel got back in the dating game in September 2015 with Australian model, Frances Aatenir. Since then, they’re going strong and show no signs of breaking up.

Despite keeping their relationship low-key, they enjoyed a public date night together in April 2016 as they watched the Toronto Raptors vs. New York Knicks basketball game at Madison Square Garden in New York.

The catwalk beauty has been coy about her relationship as she doesn’t leave any trace of his boyfriend on her social media accounts.

It’s been more than two years that Ejiofor and Frances have been dating.

They seem to be enjoying their relationship in private. The lack of announcement and news around the couple might seem like a thing to be worried about, but it’s not. It’s a known pattern that low-key relationships thrive in secrecy and when they die, they die public. Both the pair are yet to be married. From how things are progressing in their relationship, it’s possible that they end up as husband-wife at some time.

Here's to hoping that Ejiofor gets the wife he deserves!