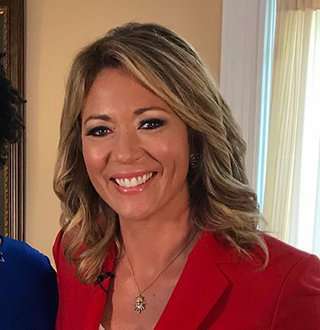 The Atlanta native is an anchor for CNN and hosts the daily segment CNN Newsroom with Brooke Baldwin. Apart from the show she also hosts and reports various events in different CNN programs.

Feminist In Heart: Brooke Baldwin talks about the next goal she has to give women voices on The Late Show with Stephen Colbert (Published on 17 October 2018)

Brooke received an Emmy nomination for her coverage of  Eric Garner's death in 2014.

Brooke Baldwin Had Her Career Spark From Early Age

Born in Atlanta Georgia on 12 July 1979, Brook Baldwin is a University of North Carolina alum in journalism and Spanish in 2001 who she started her career with local channels as a reporter. After working as a lead reporter in WTTG channel based in DC, she joined CNN in 2008.

You May Also Like: Hannah Storm And Super Supportive Boyfriend -Turned-Husband! Inside Her Family Bliss

Initially, she joined as a reporter with CNN and covered various high profile events including the launch of space shuttle Atlantis, Baltimore protests and inauguration ceremony of both Obama and Trump's presidential terms.

Her documentary To Catch a Killer was awarded the Silver World Medal for Best Investigative Report at the New York Festivals International Television & Film Awards in 2012.

In 2017, she produced a mini-series American Woman in collaboration with CNN which chronicled the journey of famous women, who had to navigate a tough journey to reach to the top. Brooke was motivated by a series of women coming out and speaking against the sexual abuse rife in Hollywood for her mini-series.

As of June 2018, she is the host of CNN Newsroom with Brooke Baldwin, a two-hour long show which airs daily in the CNN.

On 28 September 2018, Brooke concluded her Friday afternoon program on CNN with a monologue as she expressed her voice to survivors of sexual assault and abuse.

She openly shared the victims' truth in the dusk of Christine Blasey Ford's testimony against American jurist Brett Kavanaugh. While going to the extent of sharing the story of her friend who faced rape and has been in therapy for years,  Brooke became teary as she accentuated the story.

Brooke marked it as a pivotal moment in America while emphasizing at the moment that mattered more than politics.

The spiked drink. Waking up on the cold tiles of a hotel bathroom floor. The uncertainty. The shame. The thought, 'I must have somehow brought this on myself.' The silence, distrust, and invalidation.

Christine's testimony moved several Americans and brought different untold stories of survivors from behind the curtains. Brooke's monologue pulled the story of a young woman in her office sharing her story after Christine's hearing.

The talk line of C-Span was flooded with stories of sexual assault survivors that even included a 76-year-old woman whose story of getting molested as a second grader floated everywhere in media.

While Brooke has had to fend off lots of comments about her marital life, she expressed amusement after many news portals listed her to be married to Jay David. The funny thing is, neither has Brooke seen her talked up husband nor has she got any connections with him.

The rumors about her supposed husband and marriage petered out after she was reported to be dating British TV producer James Fletcher. The couple met around Christmas 2015 and started dating shortly afterward.

Brooke in an interview with AJC.com stated that James was the perfect partner for her and explained that he was very flexible with her work and even joined her in some assignments. The couple's relation went a level up after Brooke announced in July 2017 that she was engaged. She Instagrammed a photo of the pair cuddling up and wrote,

'Back from vacation. Turns out we went to Hawaii to celebrate more than just my birthday... @jamesfletchernyc asked me to marry him! And I said YES! ❤️.'

The pair married in Barn at Liberty Farms in Ghent, NY, in an intimate ceremony. The CNN reporter looked stunning in her sleeveless Naeem Khan gown accessorized with a diamond earring and long veil as she made her entrance to the marriage hall in a white Rolls Royce.

You Don't Want To Miss: CNN's Sanjay Gupta On Bright Side Of Weed! Along With Perfect Family, He Shares With Wife

James, for his part, was dressed in a smart Tuxedo, and shirt from Budd. Brooke's pug served as a ring bearer, and no eyes remained dry in the audience as the pair exchanged the vows.

Two days after the lavish wedding ceremony, Brooke thanked everyone for making her big day a success and labeled her husband as the dearest person in the world. And every passing day has brought the couple closer, as evidenced by her Instagram posts, post marriage.