Relationship
by HM Writer Last Updated:  April 15, 2021
Hildebrand has always been open about her sexuality. The only problem is she "could never decide label."

For young Hollywood stars who find it hard to be open about their sexuality, American actress Brianna Hildebrand is an inspiration.

The Deadpool star is dating her longtime girlfriend, Jonneke Grisham. She has always been vocal about her sexuality. She first came out as bisexual and then as gay. Now, she admits to having no label for her sexuality.

On Being Gay Or Lesbian — "I don't describe myself."

Hildebrand has always been open about her sexuality; the only problem is she "could never decide on what label."

By self-admittance, she was kind of out from a very young age. So much so, when she went to Hawaii with her parents in her childhood, she made them call her by the name of a boy, Jamie. She didn't even hide her sexuality in her high school.

Accepting herself and confessing that her sexuality isn't straight, Hildebrand first identified herself as bisexual. Then she went to label herself as gay. However, in an interview with Vanity Fair in April 2018, Hildebrand revealed she didn't label her sexual orientation.

I don't have a right definition for my sexuality, for a while I said I was bisexual, then gay. At this point, I no longer describe myself in any way.

She stated that playing queer or gay characters as an actress meant a lot to her. She reminisced that she would have loved to see such homosexual characters as a child.

For me it means a lot to be able to play queer or gay people, or in general not straight people. In high school, I would have loved to see a movie and characters like that.

No matter what sexuality, the First Girl I Loved actress advocates for the LGBTQ+ community. She shared her experiences about her sexuality and the hardships while growing up for its Gets Better project. The campaign was targeted to support LGBT youth worldwide.

Hildebrand started dating her partner, Jonneke Grisham, in 2016. They met on the set of First Girl I Loved, where Hildebrand played a role of a lesbian character, and Jonneke worked in the art department of the movie as a set dresser.

Towards the end of 2016, some publications suspected the couple to have ended their relationship. However, they are still together and often flaunt their love on social media like Instagram.

In April 2018, Brianna spent a fun time with her girlfriend in Indio, California. She even shared some moments they spent on Coachella on her Instagram account. 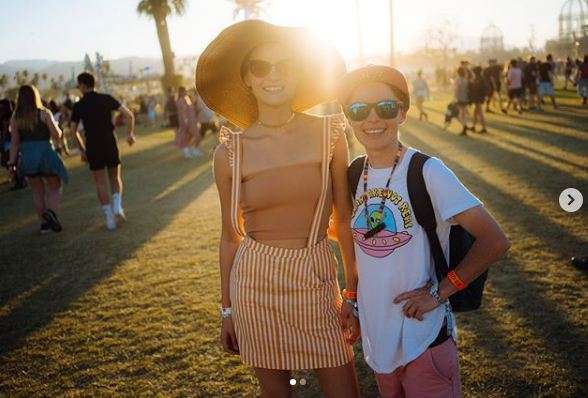 Also, they went to the 2019 Coachella together, and Hildebrand shared the moment with her fans.

Brianna Caitlin Hildebrand, born on August 14, 1996, is Veronica and Caleb Hildebrand's daughter. Her father was a car salesman.

The Texas native, who has a height of 5 feet 3 inches, had significant support from her family to pursue her acting career. She initially wanted to become a musician; however, she landed in the acting realm.

She had a big crush on Ryan Reynolds since she was in school.

The Texas native's first significant debut was in 2014 from the web series Annie Undocumented.

In 2015, she made her first theatrical film appearance as Julia in the drama, Prism. She rocketed to fame in 2016 after she was cast alongside her childhood crush Ryan Reynolds in the Marvel film Deadpool. She portrayed the gay/lesbian superhero character, Negasonic Teenage Warhead.

After Deadpool, she starred in the 2016 film the First Girl I Loved. The young actress also became a member of the main cast of the second season of the horror drama series, The Exorcist.

On 18 May 2018, she featured in Deadpool 2. She went to feature in Playing with Fire, Trinkets, and Girls Night.