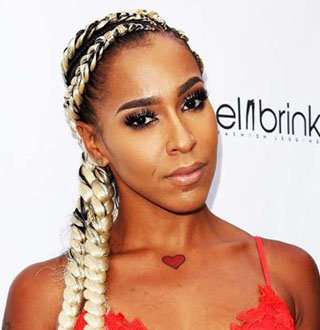 TV and media personality, Amina Pankey is best known as a cast of the Vh1 reality series Love and Hip Hop: NewYork.  She is also a songwriter and the lead singer of the R&B group Black Buddafly.

She started singing in a classical choir at six. She got a chance to polish herself as a singer through her tour with gospel groups and pop acts. She also started to write a song at 13. Her desire brought her to the reality television where she officially started her career as a singer in 2013.

Amina Pankey was born on 18 April 1983 in Hamburg, Germany. The Hamburg native was raised in a musical environment by her parents, a German mother, and a Senegalese father; Her mother is a music lover and her father is a musician.

Although her nationality is American she shares German descent and Senegalese ethnicity. She has a twin sister Jazz and an older sister Sophie. Amina and Jazz are Teammates of duo R&B group Black Buddafly. Her older sister Sophie was also a member of the group from 2005 to 2006.

However, her other personal detail including her height and high school are still undisclosed

Learn about Amina Net Worth

In her early career in 2002, she gained the attention of producer Orin Ennis which opened the door to success. In 2005 she signed a contract with Def Jam and released her two singles Rock-A-Bye and Bad Girl ft. Fabolous.

Also, with MBK Records/J she released two Mix Tapes. However, she was still struggling to gain her stardom. But her dream was finally achieved when she joined Love and Hip Hop.

You May Also Like:Brittney Atwood, Wife Of Roman Atwood; What Is Her Net Worth At Age 27?

Moreover, her YouTube channel with more than a million subscriber played an additional part to increase her popularity.

Besides that, she is also an author of the book The Other Woman. Her hard work and contribution has earned her the net worth of $600 thousand.

The popular singer Amina was married to former American rapper, Peter Gunz. Their marriage took a turn after Gunz's extramarital affiar was established with Tara Wallace.

Once Upon A Time: Gunz showing his love to ex-wife Amina before a divorce (Photo: hollywoodlife.com)

Well, the couple might have taken a different path, Gunz is still trying to be a good father to their baby daughter Cory which they had after their divorce.