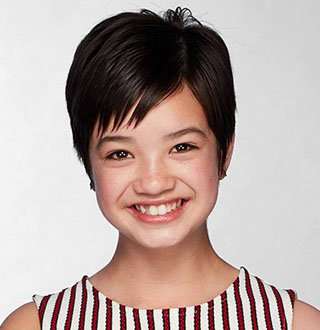 Peyton Elizabeth Lee was born with acting genes as her father is a renowned Chinese actor, Andrew Tinpo Lee. There is no doubt why she chose acting as her career, following in the footsteps of her father, she receives praise and admiration for her performances at such a tender age.

The New York-born is the new emerging young teenage star of the American Film Industry. She is well-adored among people for her role on Disney Channel series, Andi Mack (2017), Shameless (2011) and her guest appearance on the famous TV series, Scandal (2012).

You May Like: Tisha Campbell Facts: From Parents And Siblings To Shocking Net Worth

Peyton is in the dawn of her acting career. She has accomplished more than an ordinary 14-year-old kid which shows her determinations for the future.

The young actress made her TV debut in 2015 when she made an appearance on famous thriller TV show, Scandal where she portrays a character of spelling bee champion named Violet.

She then went on to appear in three different episodes of Shameless, playing the role of a brave young girl soldier. Ultimately, she got her big break when she was cast on the comedy TV show, Andi Mack in 2017. Judging from her on-screen talent, she has been bestowed with worldwide acclaim as a result of which she has already signed a contract for the 2018 project, The Lion Guard, a Disney Junior animated TV show.

From her stints on famous television series, Peyton bags considerable amount of money for her roles is TV above shows and also from advertisement as she is slowly becoming a household name in the US. Still, Elizabeth's exact net worth is unrevealed.

Peyton has an average weight of 38 kg with brown hair and sparkling eyes. The beautiful young actress stands at 5 feet 4 inches (1.64 m) tall. As she is just reaching her teenage years, she is bound to grow taller as she gets older.

Elizabeth is of mixed ethnicity. She got Chinese heritage from her father and American genes from her mother.

Peyton was born in the glamorous city of New York on 22 May 2004 but later shifted to Manhattan Beach, California. Her father is a famous Chinese actor, Andrew Tinpo Lee and her mother Jennifer Dormer Lee, who is an American psychologist.

She sees her father as her role model and the main reason for her to pursue her career in acting. According to her, she inspires to be like her father and honestly saying she is already on her path to make her dream come true.