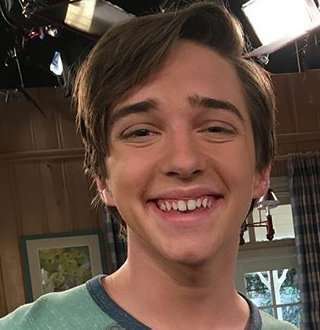 Fuller House star Micheal Campion proved his acting credentials over the years to become one of the teenage heartthrobs in the country. Along the way, his fame ended up making his lover known all over the place - the curse of popularity had hit his love life as well.

The Atlanta, Georgia native is a teenage actor and model popular mainly for his mindblowing role on Fuller House. He started his career with roles in wonderful child-movies such as ‘The Wizard of Oz,’ ‘The Little Mermaid’ and ‘Annie,’ and 'Later- Robo-Dog.' Another Teenager For You: Alex Lange Insta Model Of Age 17 Dating! Taken By This Beautiful Girlfriend

The 16-year-old actor is extremely focused on his school assignments and co-curricular activities. When he is free, he plays Minecraft with his friends and spends time with his family at home and vacations.

Michael Campion is such a teenager who shares memories of his family on social media. He is really thankful towards his parents for the level of early success he had had in his life. His parents, especially his mother, made a lot of sacrifices in order to make his acting dream become a reality. His close-knitted family comprises of his parents, Sheila and Greg Campion, and his sister Kimmy, who graduated from UCF in 2018.

Campion was born on 26 July 2002. His dream was to be a successful actor from a very young age. His parents as well supported his dreams. He started professional acting at a very young age of 8. After few years, the family shifted to Atlanta, Georgia, where Michael got an opportunity to be a part of Netflix series “Fuller House” in 2016.

On Fuller House (2016-2018), he played the role of the eldest child and amazed everyone with his brilliant performance. Both his on-screen and off-screen charismatic personalities were adored by most of the people.

Micheal Campion Made His Girlfriend Famous

Dating a celeb can change one's life and singer/influencer, Elizabeth Mendoza is a living proof. She gained more than 20 thousand followers in total just because she was dating Micheal Campion. The pair had met each other in 2017 in Atlanta.

Dating Relationship: Who Is Anthony Trujillo Girlfriend At Age 22? He Just Can't Be Single As of 2018, it looks like the pair is no longer together. They have disappeared from each other’s social media as well.

Know If Micheal Campion Is Dating Someone In 2018

In today’s generation, very few people can get what they dream at a young age like Michael Campion.

With hard work and passion, he has not only proved himself in the world of acting but has also motivated many people that nothing is impossible if one has a will and an interest for whatever he/she is passionate about!

For a young sensation of such a caliber, it is obvious for his fans to speculate about his dating life. However, as of now, the actor has not revealed who he is dating. While rumors regarding his affair with his Fuller House 17-year-old co-star Ashley Liao exists, the chemistry can only be seen on-screen.