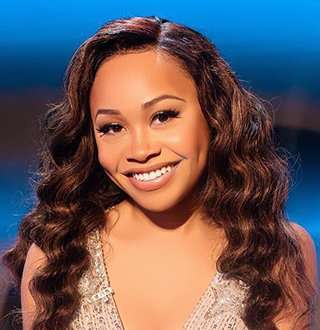 Pop music singer Evvie McKinney gushed about the reason why she was so in love with the music and the real inspiration behind the passion of her singing.

The Memphis native gained immense popularity after winning the inaugural season of The Four: Battle for Stardom in 2018. She was inspired by her father to take up the music and has taken the music world by storm due to her incredible voice.

Winner's Song: Evvie McKinney reveals her newest single How Do You Feel on the grand finale of The Four season 2 on 2 August 2018 (Published on Aug 2, 2018)

The Memphis native singer was a late entry to the reality show, The Four only entering after the sixth episode through challenger series.

Another Four Alum: Candice Boyd Has Boyfriend As Supportive As Family At Age 27 & It's Not Steve J

Evvie'McKinney's Career: Journey To The Four

The mixed ethnicity star began singing when she was just three years of age and toured the United States. She was already performing professionally across several genres when, as a 20-year-old, she joined the Fox series The Four.

Entering as a challenger in the sixth episode of the first season, she performed for a panel judges that included Sean Combs, DJ Khaled, Meghan Trainor, and Republic Records president Charlie Walk.

She performed Aretha Franklin's I Never Loved a Man (The Way I Loved You) which secured her a spot in the finals on The Four. In the finale on 8 February 2018, Evvie beat out Zhavia, Candice Boyd, and Vincint Cannady to win the show on 8 February 2018. It was the time her life changed forever.

Evvie, who stands at the height of 5 feet 5 inches (1.66 m), has been granted the opportunity to take her career to the next level with a recording contract with Republic Records. She was even named iHeartRadio's On The Verge artist.

And capitalizing on her fame found through The Four, the up and coming singer released her first single How Do You Feel. The single was released on the grand finale of the second season of The Four, the show which made her famous.

She performed the song for the first time in front of a live audience on the sets of The Four on 2 August 2018. The song has been a huge hit since its debut and Evvie has been getting rave reviews for her soulful voice from both her fans and critics alike.

The song was composed by The Four's judge, Sean B. Combs, who like millions of others, is a huge fan of the singer.

Evvie, who was born in 1997 in Memphis, Tennessee, USA, celebrates her birthday on 27 June. The Soulsville Charter School alum comes from a long line of Memphis singers.

Her father was a gospel and blues singer, and he was the one to teach Evvie singing. Her brother, Gedeon McKinney, is also a famous singer on the 5th season of American Idol.

Evvie, who is one of seven children, is close to every member of her family and bonds a caring relationship with them. She gave her mother a shout-out for her continuous love and support on March 2018 through a heartwarming caption and picture on Instagram.

Nevertheless, the real inspiration in her life is her father. After the victory in ‘The Four,’ Evvie gushed about him and cited him as the real reason behind her passion for music.

The 20-year-old singer and the first ever winner of The Four revealed that her father was an R&B singer when she initially introduced herself to the panel.

Before singing her first song in the show, the young singer said;

All of my brothers and sister sing. My father is the reason I'm standing on this stage right now. He's the reason.

Evvie learned gospel singing from her father. Sadly, her father passed away a few years ago, and she dedicated all her performances to him.

She revealed that her father is the reason why she sings today. “Every time I get on that stage — it hasn’t been one time where I haven’t said, ‘Daddy, this is for you’” said the conqueror of The Four.

The singer with a fantastic voice has been making big waves in the industry thanks to her father and the supportive clan of brothers and sisters.

And with her career on the upwards trajectory, the singer seems to be solely focused on making it into the music industry rather than getting indulged with boyfriends.

That seems to be the reason, why the men behind her back turn out to be her father and brothers and not a boyfriend.

#Pop Music Singer #The Four: Battle for Stardom #I Never Loved a Man #Gedeon McKinney #On The Verge