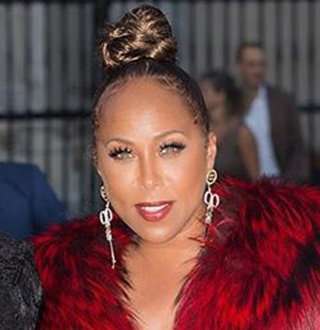 Relationships had not always favoured Marjorie Elaine. Often left heartbroken and destroyed, Marjorie had almost given up on the idea of love until she met her Prince Charming. Before that, she had been a part of numerous failed relationships in the past. But when she gave love another chance, it evidently treated her well.

The 53-year-old came into the limelight after marrying stand-up comedian and the newest host of Family Feud, Steve Harvey. She is a self-made woman who created the blog The Lady Loves Couture where she discusses fashion and etiquette. Many might assume Marjorie’s success was due to her husband, Steve. But that is not the case. Starting from a fashion blog The Lady Loves Couture; she has built a vast empire from her various business ventures.

Self Made Woman At Early Age, Net Worth

According to the wiki, her website focuses on living a fashionable life on a small budget. Marjorie is a fashion blogger who has provided her readers with various tips on fashion due to her writing skills in the world of fashion. However, her knowledge is not just limited to the fashion industry, as she sometimes writes features and talks about different food recipes.

With such a successful career to herself, Marjorie has accumulated a hefty amount of earnings. From her vast net worth, she can easily sustain her as well as her family's lavish lifestyle. But, an exact amount of her earnings has not been disclosed yet. However, husband Steve as of present has the total net worth of $140 Million.

Marjorie Harvey was born on 10 October 1964 in The United States. Her personal life has been lowkey till this date. Although there is no concrete information about her parents, her mother's name is Doris Bridges.

Failed Marriages Before Marriage To Steve

Marriages have not always been a happy union for Majorie as she has had to deal with two failed relationships in the past. Having been married twice before Steve, both her marriages failed miserably.

Both her former husbands have been arrested for drug charges and are serving their jail time. With both her husbands in jail, Marjorie has three children that provide her with a memo from her previous marriage; Morgan,31, Jason, 26, and Lori,21.

Her New Husband Also Failed In His Previous Marriages

Not only did she endure failed relationships, but her husband Steve also had to go through the same scenario with his failure in two of past marriages before Marjorie.

Before Marjorie, He was married to Marcia Harvey in 1980 but called it quit in 1994. Later he tied knots with Mary Lee Harvey on 1996, but they also parted their ways on 2005. Steve has four kids from his previous marriage; twin daughters Brandi and Karli, 35 and sons Broderick, 27 and Wynton 20.

After both partners had suffered the ignominy of having divorced twice in relationships, Steve and Marjorie reconnected in the middle of 2000s. The couple had met for the first time in 1990 and had briefly dated before going their ways.

However, after two failed past marriages, Steve and Marjorie tied the knots 17 years after their first meeting in 2007. As of now, the couple is enjoying their new found love and are living their best lives. They can be seen enjoying quality time together either going on a wonderful vacation or attending events together. The newlyweds have had their fair share of downs when it comes to relationships but now it seems that the two have finally found the perfect ones for each other and are happy and in love.