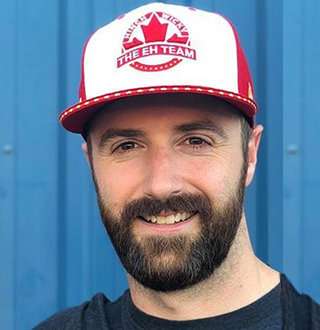 A big "Yes" from Rebecca Dalton!

James Hinchcliffe and his 29-year-old college sweetheart, Rebecca Dalton are officially engaged to get married.

The 31-year-old Canadian race car driver proposed his girlfriend during a romantic boat ride in Muskoka, Ontario on 23 July 2018. After taking part in the Toronto race on 16 July 2018, the duo drove up to the family cottage, where he planned to propose during romantic boating.

After reaching for the glove box, James pulled out a ring and asked, ‘Will you marry me? and unmistakably, Rebecca said "yes."

Unscrewing the exclusive news, James posted a picture with his future wife, who was seen flaunting the engagement ring on his Instagram. Along with the picture James officially announced the couple's engagement by saying:

Wait, what?! I thought they said “til DEBT do us part”! #BeckyGetsHinched

Similarly, his girlfriend-turned-fiancee posted an identical Instagram picture stating that she just got served a life sentence on the same day. The duo decided to step up their relationship after two years of dating.

The Ontario native first crossed paths with My Babysitter's a Vampire star Rebecca during an acting class at Oakville Trafalgar High School in 2004 but, the pair crossed their paths again after 12 years when James suffered a fatal accident.

After his severe accident in 2015, Rebecca was one of the first people to wish for a speedy recovery to him.

They reconnected together after the accident and started dating in February 2016.

Both the future husband and wife regularly share the glimpse of their endearing relationship to the followers through their respective Instagram. Recently, James shared an Instagram picture of celebrating Canada Day with his fiancee on 2nd July 2018.

The lovebirds are yet to reveal their wedding date and they told Pagesix that they want a smaller celebration next summer in Muskoka, where both of them were raised.

James, who is the professional car racer is widely known for IndyCar Series, open-wheel racing in North America. He even participated in the 23rd season of ABC's reality series,  Dancing With The Stars in 2016. He along with his dancing partner, Sharna Burgess, secured the semi-finalist position in the series.