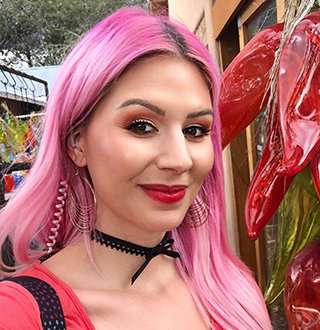 Makeup artist Annalee Belle, age 30, got engaged to JD Scott, the older sibling of Jonathan and Drew on 31 October 2018.

But the news was only revealed on 20 November 2018 when she and her fiance took to Instagram and announced the huge occasion. Annalee had nothing but sweet-honey words in the caption as she posted another picture showing off her ring.

He’s been the most encouraging, supportive, helpful, and determined friend I’ve ever had. Even before we were in a relationship, he saw me for who I was deep inside my soul. He’s shown me what it means to love unconditionally and wholeheartedly. (-Annalee Belle on her Instagram | 21 November 2018)

JD Scott, on the other side, shared the mutual joy as he wrote to Instagram, 'It looks like I get to spend the rest of my life with you. I’m on cloud 9 right now! #SheSaidYes #Engaged #Proposal #LoveOfMyLife.'

You May Also Like: Peggy Sulahian Bio: Divorced With Husband At Age 45? Swirls Rumors Annalee’s future husband posted three pictures - one was of him on one knee as Annalee stood shocked, one of the beautiful ring slipping up the future bride’s finger and the last one was of the pair gazing with love at one another.

For the Halloween occasion, Annalee embraced a colorful sequined jumpsuit with a feathery yellow jacket and a pair of black go-go boots. JD Scott, age 42, looked swoon-worthy as he sported an ash-gray jacket with formal pants and shoes.

Jonathan responded to the picture Annalee’s partner had posted of the proposal saying, ‘Congrats, Yeh. Now I have a second amazing sister.’

Then it was Drew's turn; he soon delved in and showered the couple with lovely words as he tweeted,

Congrats to my brother @mrjdscott and soon to be sister @annalee_belle! You are two of the most loving people I know and can’t wait to watch you walk down the isle #engaged

Talking about walking down the aisle, Annalee said it crystal clear that she didn’t want people to decide on when they would be pronouncing their wedding vows. She expressed that she had no desire to get married until a couple of months before which was a wish that her partner respected. How cute is that?

The couple got engaged after three years of long and hearty relationship. They were quite cute, and they frequently shared pictures of each other on social media that undoubtedly pulled in some jealous faces. But the pair got through every little trouble together for three years and took the massive step of getting engaged.

You Don't Want To Miss: Shannon Beador After Divorce With Husband, Dating New Boyfriend - Who?

Anyway, it is feasible for people to chime in and ask for the wedding date but let’s not forget that being engaged is basically making the promise to get married so it might not take long for Annalee and her partner to be pronounced husband and wife.