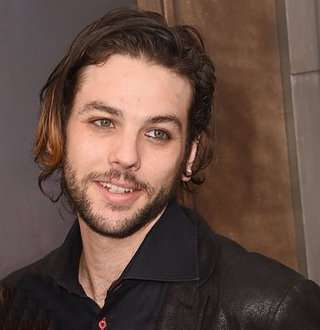 If anyone knows one thing about Navarone Garibaldi, is that he comes from a family background of well-known artists with wealth that probably overcomes their names. So, how much fortune does Navarone possess for himself?

Navarone Garibaldi is known by many in the music industry as the frontman of the band Them Guns. Many know him as the son of Priscilla Presley who is the former wife of the late Elvis Presley.

Supporting People: Navarone talks about his band and tours on the set of Kansas Bowling’s first movie B.C. Butcher (Published on 24 March 2016)

You May Also Like: Jessica Rogan Wiki: Wife To Joe Rogan, What's Her Age, Height, Net Worth?

It was at the age of 17 when Navarone was arrested for speeding while driving and possessing hallucinogenic mushrooms.

It was on 1 March 1987, Navarone Anthony Garibaldi was born to mother Priscilla Presley and father Marco Garibaldi. He is the half-brother of Lisa Marie Presley as his mother is the former wife of the late Elvis Presley.

Navarone, age 31, followed his step-father’s footsteps and initiated the Los Angeles-based rock band, Them Guns that had members including Navarona himself, Kyle Hamood, Bobby Vega, Kyle Hamood, and Chuck Holiday.

As a musician himself, Navarone has cited his musical influences as Nirvana, Nine Inch Nails, Kings of Leon, and Chemical Brothers. The band has sold out shows at The Viper Room, The Troubadour in West Hollywood and several other rock venues in the US.

Them Guns made their UK debut on 4 April 2013 at The Kings Head Club in Hoxton, and it was the first time for the club to host a live band with a private show.

As a public figure, it’s feasible that people become more curious about one’s private matters and Navarone has not bothered to hide his dating status.

The first time he introduced his girlfriend was on Instagram on 25 December 2016 as he posted an intimate picture with a girl sitting on his lap while he admitted she was his girlfriend. He soon posted another picture of the same girl kissing him in the lips on 3 January 2017.

Navarone never disclosed the girl’s identity and never posted of her after that. And it was straight after a year that he let in on his secret girlfriend on 10 September 2018 as he posted a cute picture with a girl. Adorable & Simple: Navarone and his girlfriend take a cute picture at a beach and the sun setting on the background (Photo: Navarone Garibaldi’s Instagram | 10 September 2018)

Feeding his fans with more tea, Navarone posted another picture with the same girl whose first name turned out to be Elisa after 10 days of the first picture. The pictures stopped for a month, and Navarone posted a series of photos with his girlfriend on 11 October 2018.

And the captions were poured with emotions as the singer confessed on missing her for leaving and that it had only been a day. The hashtag, #distancessuck that suggested that he was in a long-distance relationship with his girlfriend. Aww, we hope they find a way to maintain their relationship despite the distance the couple has in between.

What Is Navarone Garibaldi’s Net Worth?

Not every musician in the industry succeeds but Navarone wasn’t one of them. In fact, he has made quite a fortune with his career in the band. According to sources, a famous musician is paid $203,125 as an average salary, so there’s no doubt that Navarone earned more than that.

Now, let’s add the fact that he is the son of Priscilla Presley whose net worth is estimated is $50 million and the half-brother of Lisa Marie Presley who carries the net worth of $16 million.

How does that look? Navarone is definitely among the rich people in the music industry, and there’s no doubt that his personal net worth resides in millions as well.